North Korea accuses US of being ‘hell bent’ on hostile acts 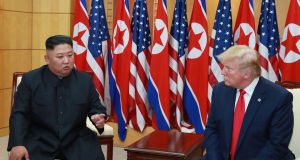 Picture released by KCNA on June 30th shows North Korea’s leader Kim Jong-un (L) and US president Donald Trump during a meeting on the south side of the military demarcation line. Photograph: KCNA/KNS/AFP

Three days after the US and North Korean leaders held a historic third meeting, Pyongyang’s UN Mission accused Washington on Wednesday of talking about dialogue but being “more and more hell bent” on hostile acts.

A press statement from the mission pointed a finger at US efforts to exert “overt pressure” and have the world’s nations implement UN sanctions.

First, it said, the US and 23 other countries sent a letter to the UN Security Council committee monitoring sanctions on North Korea demanding urgent action “under the absurd pretext of ‘excess in the amount of refined petroleum imported’”.

The United States and the other countries accused North Korea, or the Democratic People’s Republic of Korea (DPRK), of violating UN sanctions by importing far more than the annual limit of 500,000 barrels of refined petroleum products, which are key for its economy.

But last month Russia and China blocked the sanctions committee from declaring that Pyongyang breached the annual import limit.

North Korea’s UN Mission said the United States, Britain, France and Germany then circulated a joint letter to all UN member states on June 29th “calling for repatriation of the DPRK workers abroad, thus inciting an atmosphere of sanctions and pressure against the DPRK”.

That day, US president Donald Trump issued an unprecedented invitation to meet with North Korean leader Kim Jong Un at the demilitarised zone between the two Koreas. Mr Kim accepted, and at their Sunday meeting Mr Trump became the first sitting US president to set foot in North Korea when he crossed the demarcation line.

The pair agreed at the meeting to restart negotiations designed to denuclearise the Korean peninsula. North Korea’s state media described their meeting as “an amazing event”.

But there was nothing positive in Wednesday’s statement from North Korea’s UN Mission, which made no mention of nuclear talks, focusing instead on sanctions.–PA