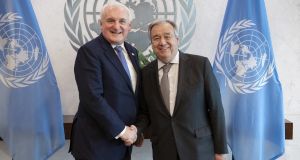 Former taoiseach Bertie Ahern on Wednesday stressed to the UN the need for focus on maintaining peace in Papua New Guinea after an independence referendum in the region later this year.

Mr Ahern met UN secretary general António Guterres in New York to discuss the progress of the peace process in the autonomous region of Bougainville.

Mr Ahern was appointed chair of the Bougainville Referendum Commission (BRC) in December 2018. An independence vote originally planned for June is due to take place in October. The commission has applied for a further extension on the date and it will be discussed at next week’s meeting in Port Moresby, the capital of Papua New Guinea.

Bougainville was declared autonomous following a bloody conflict that resulted in about 20,000 casualties between 1989 and 1997.

Mr Ahern spoke of the need to create opportunities for economic and social development in the region with a population of about 250,000 people.

Ireland’s Ambassador to the UN Geraldine Byrne Nason as well as representatives from Australia, New Zealand and the European Union were also at the event.

Mr Ahern paid tribute to the UN organisations who are involved on a permanent basis on the ground assisting the process of reconciliation.