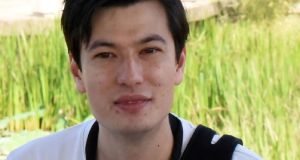 A handout photograph from the Sigley family showing Alek Sigley, who is one of only a handful of Western students who studies Korean literature at Kim Il-sung University in Pyongyang, North Korea.

An Australian student has been released after a week in detention in North Korea and is “safe and well”, Australia’s prime minister has said.

Swedish diplomats had raised the case of Alek Sigley (29) with North Korean authorities in Pyongyang where Australia does not have an embassy.

“I’m pleased to announce that Mr Alex Sigley has been today released from detention in the Democratic People’s Republic of Korea (DPRK),” Scott Morrison told Australia’s parliament to cheers from politicians.

“Alex is safe and well. Swedish authorities advised the Australian government that they met with senior officials from the DPRK yesterday and raised the issue of Alex’s disappearance on Australia’s behalf,” he added, using the official name for North Korea.

Mr Morrison said that North Korean authorities released Mr Sigley early on Thursday, “and he has now safely left the country and I can confirm he has arrived safely”.

“This outcome demonstrates the value of discrete behind-the-scenes work of officials in resolving complex and sensitive consular cases in close partnership with other governments,” he added.

“I’m sure we all could not be more pleased that we not only know where Alek is, that we know he is safe.”

The Pyongyang university student lost contact with family and friends in Japan and Australia on Tuesday last week.

Mr Morrison’s announcement was the first confirmation that he had been detained. – AP