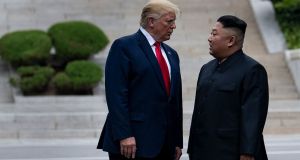 Mr Trump on Sunday became the first sitting US president to enter North Korean territory after shaking hands with Mr Kim at the demilitarised zone that divides the Korean Peninsula. The third meeting between the two leaders was orchestrated quickly after Mr Trump on Saturday invited Mr Kim via Twitter to meet.

The Korean Central News Agency, North Korea’s state-run news agency, reported that the “historic meeting” had captured worldwide attention and noted Mr Kim’s statement that it was made possible because of “good personal relations with President Trump”.

The Rodong Sinmun, North Korea’s most prominent newspaper, carried dozens of photos from the meeting, including images of the two leaders shaking hands and smiling.

The extensive coverage given to the event by the regime’s propagandists has underscored concerns that the meeting boosted Mr Kim’s stature without requiring him to offer any concrete steps towards ending its nuclear weapons programme.

Analysts said Mr Trump’s decision to seek a meeting before there had been any movement by Pyongyang would be portrayed as a propaganda coup by the regime to bolster its position.

“This isn’t going to be recorded in North Korea’s history as a benign US ‘invitation’ to a meeting, but rather as Washington trying to curry Pyongyang’s favour to win face-time with the Dear Leader,” said Soo Kim, a policy analyst at Rand Corporation and a former CIA analyst.

After the leaders’ almost hour-long meeting at the DMZ, Mr Trump signalled the resumption of nuclear talks in the coming weeks, marking a potential breakthrough after months of deadlock following their Hanoi summit in February.

The Trump administration has insisted on a deal that would require Pyongyang to end its nuclear programme and give up its existing weapons while Mr Kim has sought the removal of sanctions in return for incremental steps towards denuclearisation.

Jina Kim, an analyst at the Korea Institute for Defense Analyses, a think tank, said getting the North Koreans to return to negotiations was something of a “political victory” for Mr Trump but she did not expect “any significant progress to be made in the short-term”.

“There are no remarks to confirm whether North Korea accepted US demands on comprehensive dismantlement of the North’s programme,” she said.

Many experts also remain wary of a lack of substantive discussions over thorny issues including verifying any moves toward denuclearisation and unwinding sanctions, despite the series of meetings between the two leaders over the past year.

“Until those technical, nuanced, step-by-step processes are an active part of the discussion then it is going to remain in a stalemate. The unfortunate thing right now is that Trump doesn’t seem to include that as a big part of his summitry,” said Darcie Draudt, a Seoul-based researcher at Johns Hopkins University. – Copyright The Financial Times Limited 2019