May to warn no-deal Brexit could endanger integrity of UK 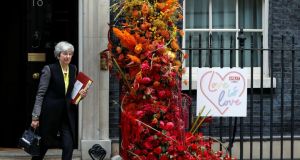 Britain’s prime minister Theresa May will claim that she made strengthening the Union an explicit government priority. Photograph: Peter Nicholls/Reuters

Theresa May will warn on Thursday that a no-deal Brexit could endanger the integrity of the United Kingdom, urging her successor to make protecting the Union a top priority. Speaking in Scotland, the prime minister will claim that she made strengthening the Union an explicit government priority.

“The job of prime minister of the United Kingdom of Great Britain and Northern Ireland brings with it privileges and responsibilities which you only really feel once the black door closes behind you. One of the first and greatest is the duty you owe to strengthen the Union,” she will say.

“To govern on behalf of the whole United Kingdom. To respect the identities of every citizen of the UK – English and Scottish, Welsh and Northern Irish. And to ensure that we can go on facing the future together, overcoming obstacles together, and achieving more together than we ever could apart – a Union of nations and people.”

Both Boris Johnson and Jeremy Hunt have promised to take Britain out of the European Union without a deal if they cannot secure changes to the withdrawal agreement by the end of October. But Mrs May believes that a no-deal Brexit will boost support for Scottish independence and amplify calls for a Border poll in Northern Ireland.

The House of Lords on Wednesday night agreed to set up a joint committee with the Commons to examine the cost of leaving the EU without a deal. Former Northern Ireland secretary Peter Hain reminded peers that in her letter to the EU triggering article 50 in 2017, Mrs May promised that Brexit would cause no harm to Ireland.

“This is vitally important because the bilateral relationship between our government and theirs is the lynchpin of the 1998 Good Friday Agreement and the peace process. Yet a No Deal Brexit would have profoundly damaging consequences for both the Republic of Ireland and Northern Ireland which voted by 56 per cent to 44 per cent to remain in the EU in 2016,” Lord Hain said.

He said a no-deal Brexit would cause serious economic damage to both parts of Ireland and to Welsh ports such as Holyhead. And he warned that leaving without a deal would make a Border unavoidable under World Trade Organisation (WTO) rules.

“Both Tory leader candidates yesterday spuriously suggested that novel but so far completely unidentified technology can prevent a hard border. But unless there are common trade regulations and customs rules on either side, no amount of fancy technology can resolve the problem,” he said.

“It is not the backstop, but a no-deal Brexit which will threaten the Union between Northern Ireland and the rest of the UK. Which is a major reason why No Deal must be stopped.”