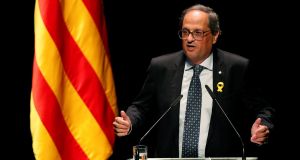 Catalonian regional president Quim Torra at the National Theatre of Catalonia in Barcelona, on Tuesday. “We will never renounce our right to self-determination,” Mr Torra said. Photograph: Alejandro Garcia/EPS

Catalan president Quim Torra has said that the staging of a referendum on independence is the only solution to Spain’s territorial crisis and warned of a backlash if secessionist leaders are not absolved in an upcoming trial.

In a defiant speech in Catalonia’s National Theatre in Barcelona, titled Our Moment, Mr Torra sought to motivate the Catalan independence movement ahead of the anniversary of last year’s divisive October 1st referendum on secession. He also offered clues as to the Catalan government’s strategy over the coming months.

“We will never renounce our right to self-determination,” Mr Torra said. “I appeal to the Spanish state to negotiate in good faith,” he added. “It is in the hands of the new government not to make the same mistakes as [Mariano] Rajoy.”

The conservative Mr Rajoy was replaced by Pedro Sánchez, a Socialist, in June and the new prime minister has taken a more conciliatory line on the Catalan issue, engaging in dialogue with the northeastern region’s government.

On Monday, Mr Sánchez had reiterated his government’s willingness to stage a referendum in Catalonia on improving existing self-government powers, but “not on self-determination”. While Mr Torra underlined the need for dialogue, his insistence on an independence vote appears likely to put the region once again on a collision course with Madrid.

“Only a negotiated, binding and internationally recognised referendum on self-determination will resolve the conflict,” the Catalan leader said.

Mr Torra took office in May, following several months of turmoil. Last October’s chaotic, outlawed referendum, in which the vast majority of the 43 per cent of voters who turned out backed independence, led to a unilateral declaration of independence. However, the Rajoy administration took control by introducing direct rule, as many independence leaders either fled the country or were imprisoned.

Mr Torra insisted on the legitimacy and “success” of the October referendum as a barometer of pro-independence feeling. He described that vote and the independence declaration as “our starting point”, suggesting that the upcoming October 1st anniversary will be celebrated on a major scale.

But despite Mr Torra’s claim that the independence movement has a “social majority”, polls suggest the cause still falls marginally short of the support of half of Catalans.

No date has yet been set for the trial of the independence leaders, who face charges that include rebellion and misuse of public funds for their role in last year’s referendum. However, it is expected to begin this winter and Mr Torra said that if the defendants are not absolved, he will reject the decision and consult the secessionist-controlled Catalan parliament on how to proceed.

On September 11th, Catalonia will celebrate its Diada, or national day, which has become an event dominated by supporters of independence as they fill the streets of Barcelona and other cities to defend their right to break away from Spain.

Mr Torra called on Catalans to “take the example of struggles such as that of [Martin] Luther King” and take to the streets again in the coming weeks.

He also underlined the need to ensure the Catalan separatist cause has international attention and support. No EU government has acknowledged Catalonia’s right to break away from Spain. However, the Spanish judiciary’s failure to extradite former Catalan president Carles Puigdemont from Germany on rebellion charges was hailed by the independence movement as a victory.

The Catalan leader’s speech drew an immediate response from Albert Rivera, leader of Ciudadanos, the leading unionist party in the region.

“Torra looks down on the majority of Catalans and announces another offensive to try to liquidate Spain,” he tweeted. The Ciudadanos leader repeated his call to the Spanish prime minister to reintroduce direct rule in Catalonia “before it is too late”.