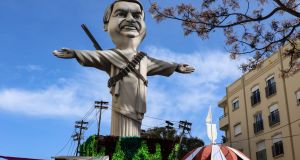 Brazil’s president Jair Bolsonaro was left with a serious post-carnival hangover after opponents and allies alike condemned his decision to post an obscene video of revellers on his Twitter account.

Brazilians were left stupefied after Mr Bolsonaro posted the video Tuesday of two men engaging in lewd acts before a cheering crowd at a street party in São Paulo. In his text accompanying the clip he expressed unease at highlighting the material but said it was necessary to expose the truth, saying the video was evidence of what many of the street carnival groups known as blocos had become.

Enjoying a surge in popularity in recent years, the often irreverent blocos have transformed São Paulo’s carnival into one of the biggest in Brazil with many of the groups taking socially progressive stances that are an anathema to the far-right president.

Despite the overwhelming negative reaction to the first post, Mr Bolsonaro then followed it up by returning to Twitter on Wednesday to ask what a golden shower was, referring to one of the acts in the video.

The episode has once again sparked debate about whether Mr Bolsonaro, a former army captain known for his brittle temper and ultra-conservative social views, is fit for office. Writing in the Folha de S.Paulo newspaper, columnist Mariliz Pereira Jorge said the president “shows himself to be incapable, inconsequential and worse, unbalanced. I am beginning to think it will be a miracle if he finishes his mandate”.

Lawyer Janaina Paschoal, author of the impeachment request that eventually led to the removal of Dilma Rousseff from power in 2016 and now a state deputy for Mr Bolsonaro’s Social Liberal party, said he had erred in posting the video but the affair did not rise to the level of an impeachable offence as some had claimed.

What has the military’s reaction been?

Ms Paschoal blamed the president’s post on his impulsiveness and that of his son Carlos who last month was involved in another scandal that played out in part on Twitter, in which the pair were found to have lied about the events leading up to the firing of the former leader of the Social Liberals from his post as the president’s secretary general over corruption allegations.

That affair exacerbated tensions between Mr Bolsonaro and his three sons and the military figures who now dominate his government and who are reportedly uneasy at what is increasingly perceived as a lack of presidential decorum among the first family.

The video has also reinforced fears that Mr Bolsonaro is far more interested in pushing his hard-line conservative agenda on social issues that plays well with his conservative base rather than attempting to build the necessary support for his economic team’s ambitious structural reform agenda. Though an avid user of Twitter, Mr Bolsonaro has had little to say on it about his government’s flagship project, a painful and unpopular reform of Brazil’s ruinous pension system.

Apparently undeterred by the reaction to his carnival tweets Mr Bolsonaro returned to his socially conservative agenda on Thursday, telling a military audience in Rio de Janeiro he would govern alongside “those who respect the family” and that democracy only exists when the military wants it to.