Analysis: UAE has maintained relations with Iran despite Saudi hostility to Tehran 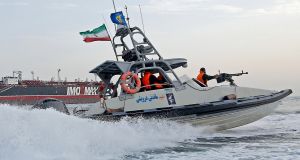 Emirati and Iranian border and coast guard commanders have met for the first time in six years in Tehran to boost maritime co-operation in the Strait of Hormuz after tensions rose in the Gulf following the imposition of US sanctions on Iran.

Although UAE officials sought to play down the encounter due to the sensitivities of their Saudi ally, photographs of Iran’s border police chief Brigadier General Qasem Rezaei shaking hands with his Emirati counterpart Mohammad Ali Mesbah al-Ahbabi were widely circulated on Iranian news websites.

The sides signed a memorandum of understanding laying out the commitments of each and agreed to hold six-monthly meetings to further co-ordination and deal with threats to the security of the two countries.

Last month, the UAE withdrew troops deployed in the stalemated war in Yemen, which has been waged jointly by the Emirates and Saudi Arabia against Houthi rebels, allegedly backed by Iran. The Houthis welcomed the UAE talks with Tehran.

The UAE has called for de-escalation and a return to diplomacy to replace confrontation in the Strait of Hormuz, through which 20 per cent of the world’s oil exports flow. Emirati foreign minister Anwar Gargash has said his country and Saudi Arabia prefer a political approach to Iran rather than confrontation.

Tensions have soared due to sabotage of ships anchored off the UAE, Britain’s seizure of a supertanker transporting Iranian oil into the Mediterranean, Iranian detention of a British vessel in retaliation, and the deployment by the US and Europe of naval vessels to accompany ships through the Strait of Hormuz.

Despite Riyadh’s enmity toward Tehran and crippling US sanctions imposed on Tehran, the UAE has maintained commercial relations with Iran, importing steel and metal items and laundering Iranian money in violation of US sanctions.

The Financial Times reported that UAE-Iran trade last year was valued at $19 billion (€16.9 billion) but predicted that this year the sum could be halved due to sanctions. Losses from the reduction of Iranian trade could exact a high price from the UAE, especially Dubai, where many offshore Iranian firms are based. The UAE economy is experiencing slow growth and Dubai’s free market business model appears to be faltering.

All seven member states in the Emirati federation would suffer greatly from a conflict in the Gulf, which would shut down oil exports, one-third of UAE revenues, as well as earnings from trade, tourism, and east-west air traffic.

While opening a new chapter in relations with the UAE on security, Tehran has also reaffirmed co-operation on this issue with Qatar, which has been has been blockaded and boycotted by the UAE and Saudi Arabia since June 2017.

They accuse Doha of collusion with “terrorists” due to its support for the Muslim Brotherhood and demand it cut ties to Iran.