The EU’s future depends on its relationship with China 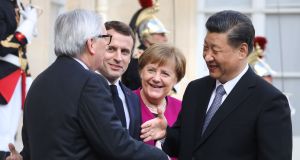 The 14th-century admonition that “He who sups with the devil should have a long spoon” is the mantra these days of many European leaders. The devil in question is China.

This week’s visit by Chinese president Xi Jinping to Italy and France, and the looming EU-China summit in April, are on their mind. Europe is embracing the challenge of developing new strategic and deeper economic relationships with Beijing, but cautiously.

And very much with an emphasis on a united approach rather than through China’s preferred bilateral contacts.

“We should not be naive,” Dutch prime minister Mark Rutte warned reporters in Brussels after last week’s EU summit, in a clear allusion to Italy’s populist government’s alleged go-it-alone diplomacy on this issue.

German foreign minister Heiko Maas also had sharp words for Rome in the same vein. “If some countries believe that they can do clever business with the Chinese,” he warned, “then they will be surprised when they wake up and find themselves dependent.”

Noting that EU member states were sometimes not adequately taking into account national and European interests, budget commissioner Guenther Oettinger even suggested that “a European veto right, or a requirement of European consent – exercised by the [EU] Commission – [on such deals] could be worth considering.” That’s one that will never fly.

But as Italian ministers point out in response to French, German and British criticism of their willingness to sign up to China’s massive Belt and Road Initiative, Beijing’s investment in Italy is in the halfpenny place compared with its involvement with it.

In a nod to fellow leaders’ concerns, French president Emmanuel Macron turned his one-on-one with Xi into a multilateral mini-summit, inviting German chancellor Angela Merkel and European Commission president Jean-Claude Juncker to the party. The message to the Chinese was supposed to be an unambiguous: “United we stand.”

The commission has been working to redefine its relationship with what it called in a widely praised paper published this month a “systemic rival”, all the while acknowledging what China’s foreign minister in Brussels called, in somewhat Maoist style, the “10 convergences” – policy overlaps in areas of global significance.

With Donald Trump tearing up the old world order, the EU sees important common cause with China on a wide range of issues, from preserving the Iran nuclear deal to safeguarding the commitments of the Paris climate accord, as well as on rewriting the World Trade Organisation rulebook, development co-operation, the survival of the UN, co-operation on peacekeeping and security and defence matters in Africa, and denuclearisation of the Korean Peninsula.

Above all, there’s the shared commitment to multilateralism, although China defines the notion somewhat differently – not so much a commitment to a “rules-based international order” as to “the purposes and principles of the UN charter”, code for a less collaborative approach without shared “universal values”.

EU diplomats say they are also mindful of the need to ensure the union does not become a tool of either of the great powers against the other. And the text of the joint declaration of the April summit remains some way from agreement, with some speculating there won’t be one.

The EU and China are not on the same page yet on a number of key issues. A human rights dialogue is very tentative, and a couple of big areas in the EU-China economic relationship are very problematic.

Reciprocation by the Chinese – the Irish and some of the smaller states prefer the term “a level playing field” – for the same access to Chinese markets that the Chinese enjoy in Europe, and the ability to compete for their huge government procurement contracts, are crucial. Though, again, within the EU such shared interests are manifested in different demands.

The EU has also been reluctant to accept the US approach to the supposed security threats represented by Chinese access to telecom networks that arise out of fears such companies could be forced to facilitate espionage by Beijing.

Instead of acceding to US demands for a ban on Huawei Technologies, the commission gave member states until July to report back on risk assessments of 5G network infrastructure in their individual countries.

China is the EU’s second-largest trading partner, with trade between them worth well in excess of €1 billion a day – in 2017, the EU exported €198 billion to China and imported €375 billion.

On Monday, Beijing and Paris signed deals worth billions, with China announcing it would buy 290 A320 aircraft and 10 A350 aircraft from the European consortium Airbus. Italy did some €2.5 billion worth of trade deals during Xi’s visit.

The EU-China relationship is vital to the future of the union – not surprisingly, then, there were grumbles at the Paris summit last weekend that the issue was being overshadowed by the seemingly endless Brexit saga.