Brexit: The long walk to promised land of an independent Britain 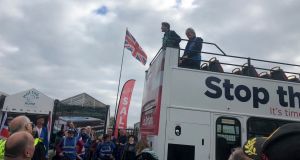 Richard Tice and Tim Martin address the crowd from the bus at Towcester. Photograph: Patrick Freyne 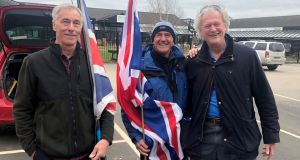 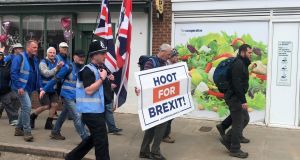 In the carpark of a garden centre in Towcester around 200 people are gathering around a big white bus bearing the legend “Stop the Brexit Betrayal”. They’re all part of the “Leave Means Leave” march which has been moving steadily from Sunderland to London since March 16th. Today, they’re marching the 12 miles from Towcester to Padbury and today’s big Brexiteer is Wetherspoons founder Tim Martin.

Martin has been on a “100 pubs” media tour talking about Brexit and he is not heartened by the series of indicative votes taking place in parliament. “The middle syllable is ‘dick’,” he says. “I think that says a lot.”

He believes the fact that Britain isn’t leaving the EU this Friday is a betrayal of democracy and that being in the EU means rule from abroad. “And as anyone in Ireland knows, who you’re ruled by is a very emotional issue.”

There are 100 core marchers who’ve been to every location along the way with another hundred or so daytrippers joining just for the day. Most of the people here are middle-aged and older. They wear sensible walking shoes and wave Union Jack flags. The original bits of the march were almost 20 miles long, their press liaison person tells me, “but we made it shorter due to the age of the marchers”.

“I shall go as far as I can,” says retiree, Elizabeth Burdzy. “We might try to follow in the car.”

Burdzy is very patriotic. She tells me her house is filled with pictures of the queen. “I don’t want Britain to be ruled by Europe, ” she says.

Her Polish husband, James, seems a bit more bemused by Brexit. He tells me that he thinks that England has never taken well to being told what to do and that he thinks it goes back to the era of empire. “They want to be,” he looks for the word, “superior”.

“What you’re saying is that we’re proud,” says Elizabeth.

A pro-remain group – #ledbydonkeys – parks a truck across the road. A panel on the side of the truck displays old tweets from key Brexiteers such as Jacob Rees-Mogg, Michael Gove and Boris Johnson in which they declare support for a soft version of Brexit, the single market and the idea of a second referendum. “Those cheeky monkeys,” says Michele Larner, shaking her head.

“The EU is an appalling organisation run for the Germans and the French,” says her partner, John Wathen. “And [Theresa] May’s deal is a fudge, an attempt to make it look like we’re leaving when we’re not.”

Is he worried about leaving without a deal? “Not at all. German car manufacturers . . . and French and Italian wine providers will be lined up at the docks with nowhere to go . . . Why would they hurt themselves to hurt us?”

Does he worry about the Irish Border? “The Good Friday agreement is sacrosanct,” says Wathen. “The only worry would be that European immigrants would cross into Ireland and go into Britain.”

He thinks that could be solved by a sea border.

At this point, Leave Means Leave founder Richard Tice ascends to the top of the open-top bus and introduces Martin. Martin delivers a short speech, the gist of which is that the EU is terrible and Westminster is terrible. When he mentions that this is Andrea Leadsom’s constituency, everyone boos. When he says, “Parliament has not fulfilled its promise!” a man cries, “Lying toads!”, and everybody laughs.

Then 200 people hit the road, waving their banners and flags. As we walk through Towcester, John Knight, who has his Union Jack on a long telescopic poll, finds he has to avoid overhanging wires. “I didn’t anticipate this being such a problem.”

The man leading the parade holds a big sign asking motorists to “Hoot for Brexit” and many cars do. As everyone crosses the road, at one point, there’s some angry over-and-back between one Union Jack draped marcher and an impatient motorist.

“He’s a remainer,” says one woman. “I’m surprised he slowed down.”

Jeff Wyatt has a “Parliament versus the People” sign hanging on his back. He wants to leave the EU for reasons of “sovereignty” and to curb immigration. As a businessman, he says he’s seen prices of European products go up but he believes that this is down to the currency manipulations of Remain-inclined city traders. He is angry with the lack of progress on Brexit. “The ballot paper said ‘leave’ or ‘remain’ and what the traitors in parliament are trying to do is hijack the vote. . . It’s a coup. It’s treachery.”

Fellow businessman Alex Moody is also angry. “The people who want to ignore the votes, they’re the anti-democrats, they’re the fascists . . . They need to honour the vote. Nothing else will do. If parliament doesn’t do that and the government don’t that. It will be serious. There will be trouble. There will be violence and that would be right because if the people are not respected what other tools do the people have? We voted to leave.”

Glasgow-born Nigel Birrell agrees with Moody about the potential for violence if Brexit doesn’t happen. He wouldn’t condone that himself, he says, being a Christian and an advocate of non-violent protest (“like Gandhi”) but things are looking bleak for hardcore Brexiteers.

He has just been reading news that former campaign leaders such as Johnson and Rees-Mogg might be willing to support May’s deal. “I thought they were going to fight to the end, but perhaps not . . . If our leaders leave the battlefield, are we right to still be there? Yes, is the answer.”

Farm worker Kevin Russell is wearing a Union Jack poncho. He says he doesn’t know enough about farm economics to know what the implications of Brexit are for British farming, but he’s been a leaver since the start. “I had ‘vote out’ painted on my van,” he says. Immigration is an issue for him, he says, particularly “after the Germans opened the floodgates to all those migrants”.

Mandy Childs can’t believe that the country isn’t going to be out of the EU by Friday. “I’m ashamed of our prime minister,” she says. “And I’m ashamed of your prime minister, strutting on the stage there, thinking he’s one of the big boys. But they’ll eat him up and spit him out. He’s very useful to them, at the moment, but his little ego has got the better of him.”

Like everyone else I speak to today, Childs refuses to believe that the Irish Border will cause any difficulties. “As Yanis Varoufakis said, the EU will always find something that’s a red herring and the border is a red herring.”

Hilary Baxter tells me how positive it is to see “the Irish talking about Ireland as an independent nation again”,

This is yet another positive consequence of Brexit, she says. She shows me a laminated sheet of anti-EU points she has hanging around her neck. She talks about bureaucratic red tape and youth unemployment across Europe and the “stagnant euro zone”. She believes that any problems caused by Brexit would ultimately be worth the trouble.

“In a hundred years the world will look back and this will just be a five- or 10-year blip.”