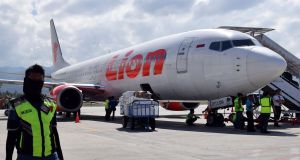 Despite the lifting of EU and US bans, safety problems have continued to surface at Indonesian airline Lion Air. File photograph: AFP/Getty Images

For much of its less than 20-year existence Lion Air has been banned from flying to the United States and European Union because of fears over its safety record.

Not only has it had 15 serious incidents – some fatal and most producing injuries and loss of aircraft, between 2002 and today – but its attitude to safety and Indonesia’s inefficient regulator caused it and most of the country’s airlines to remain banned until June 2016 when they passed a series of checks. At one stage, it was revealed, Lion Air was flying more than 40 routes without government permission or oversight.

Nonetheless, despite lifting of the EU and US bans, safety problems have continued to surface at the Indonesian airline. And its safety regime will, in all probability, rank highest among the issues which air crash investigators must consider following this latest disaster. They will also, no doubt, consider if the airline’s phenomenal growth in the past few years may have created management problems.

Indonesia’s flying conditions are among the world’s most dangerous. Weather, especially torrential tropical rainstorms, are a major cause of runway accidents and incidents, while remote airfields are often rudimentary.

Monday’s fatal crash is the third safety-related incident requiring a formal investigation since Lion Air was restored to the EU’s favoured airline listing.

The aircraft that crashed was new, delivered in August and had completed just 800 flying hours. It is the latest generation of the Boeing 737 series which in turn is one of the safest aircraft ever produced. Called the 737 Max, it is an advance on the popular and reliable 737-800 model, hundreds of which are flown by Ryanair. These aircraft have the latest safety features, including many additional systems that warn pilots on safety and other difficulties.

The cause of this crash is, as yet, unknown. But the fact that the pilot radioed for permission to return to the airfield after 13 minutes airborne indicates he was aware of problems with the passenger jet. This might rule out catastrophic causes for the crash such as a terrorist bomb exploding or a mid-air breakup of the aircraft.

Pilot error, unfortunately, is statistically the largest cause of crashes involving modern aircraft and accounts for some 80 per cent of incidents. Mechanical failure and weather are blamed in large part for the remainder. But even when mechanical failure is an issue, pilot error often compounds the problem. This was the case with the Air France 447 crash of June 2009 when airspeed sensors suddenly froze at high altitude causing the autopilot to fail. The pilots did not spot the problem and the aircraft stalled and crashed, killing all 228 aboard.

There were also similarities with Flight 447 when Indonesia AirAsia Flight 8501 plunged into the Java Sea sea, killing all 162 aboard in December 2014. While there was failure of a rudder component, inappropriate actions by the confused pilots caused a survivable malfunction to become a disaster.

Sometimes aircraft carry the seeds of their own destruction undetected for years and this was the case with at least two Boeing 737s in the 1990s. They crashed when the rudders flipped over suddenly while landing, causing the aircraft to plunge uncontrollably into the ground. It took seven years for investigators to work out what had happened. Subsequently, airlines with 737s were required to replace vital rudder parts in order to prevent such repeat incidents.

Could something similar be the cause of this Lion Air crash? Sometimes unproven new technology can introduce a safety hazard. This was the case with the state-of-the-art Boeing 787 Dreamliner, the so-called “plastic fantastic”, where every effort had been made to reduce weight by replacing metal components with plastic in order to increase range while reducing fuel consumption.

A series of fires in the new lightweight lithium batteries powering the aircraft’s electrical systems demonstrated these power cells were so unsafe that the entire 787 fleet, 50 in total, was grounded for three months in 2013 until fire prevention measures were implemented.

Nonetheless, such problems continue to reoccur – one of the latest being aboard a United Airlines Dreamliner which landed in Paris in November of last year with a seriously overheated battery.