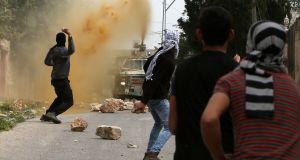 India’s paramilitary Central Reserve Police Force (CRPF) has rejected an Israeli “stink bomb”, used for the purposes of crowd control, on the grounds that it is not smelly enough.

“It [the stink bomb] was found to be ineffective during trials, as Indians probably have a high threshold of enduring stench,” an unnamed officer from the CRPF told the Hindustan Times on Thursday.

Its earlier efforts at crowd control in the turbulent province included using shotguns, which fired special cartridges containing tiny iron balls and irregular-shaped metal shards. These had blinded more than 100 people, leading to a public outcry.

But the “captive” gathering of CRFP personnel and civilian volunteers that participated recently in trials in New Delhi featuring Skunk showed that they could tolerate its odour without much discomfort.

The CRPF headquarters in New Delhi, however, declined to officially comment on trials involving Skunk.

Israeli security forces have been using Skunk, a malodorous substance dispersed through water cannons, since 2008.

Made from a mixture of baking powder, yeast and other ingredients, the organic and nontoxic Skunk emerges from the cannons as a yellow watery mist; its overpowering odour can linger for days on the human body. In clothes, its smell can remain for months, if not years, experts said.

The principal reason for Skunk failing India’s smelly deterrence test is that a large proportion of the country’s population is used to living in foul-smelling environments, which are becoming worse with the pressure of population and breakdown of civic facilities.

All cities, including the federal capital New Delhi and Mumbai, are grappling with mountains of garbage that continue to proliferate. In many neighbourhoods, garbage piles have in recent years become prominent landmarks.

In the 1960s British journalist and author Arthur Koestler compared Mumbai’s odours to those of a “wet, smelly diaper” wrapped around his head. His contemporary, Nobel laureate VS Naipaul, declared that “Indians defecate everywhere”.

But instead of dealing with the problem, India took the easy way out – it banned both Koestler’s and Naipaul’s books.

Half a century later, India’s population is touching 1.25 billion, and, according to the World Health Organisation, India accounts for 59 per cent of open defecation in the world and over 90 per cent in south Asia.

It’s little wonder that Skunk has proved ineffective in India.

1 Why Sinn Féin will not call the State by its name
2 Spread of coronavirus triggers European travel curbs
3 Anti-social chants bringing sour note to schools rugby
4 Martin and Varadkar to hold exploratory talks on possible coalition
5 What evidence is there that the IRA still controls Sinn Féin?
Real news has value SUBSCRIBE