Dutch PM responds to petition on passports as 100,000 citizens in UK face uncertainty 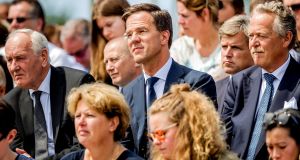 Dutch prime minister Mark Rutte attends an event to unveil a national monument to commemorate the victims of the Malaysia Airlines crash in Ukraine in 2014, in Vijfhuizen, Netherlands, on July 17th, 2017. Photograph: Remko de Waal/Reuters

The Dutch government has issued an uncompromising warning to its nationals living in Britain that if they take UK citizenship as a means of circumventing the uncertainty about their future residency posed by Brexit, they will lose their Dutch passports.

There has been growing pressure on caretaker prime minister, Mark Rutte, to abandon the country’s opposition to dual nationality for its 17 million citizens, around a million of whom live abroad – and some 100,000 of whom live and work in the UK.

However, responding to a petition of more than 22,000 signatures demanding that the law be changed to allow Dutch citizens hold two passports, Mr Rutte said his opposition to dual nationality would not change – and would continue in any new cabinet.

“Having a nationality is about having an actual link to a certain country,” Mr Rutte contended. “It’s my view that if one’s link to the Netherlands ends, or if the link to another country becomes stronger, then Dutch nationality should end too.”

More than 130 days after the general election in March, negotiations under three different mediators to form a new coalition government led by Mr Rutte have failed to produce agreement – and the parties are now on a two-week summer vacation.

While Mr Rutte cannot currently speak for the four parties involved in the talks – his own Liberals, centre-left D66, the Christian Democrats and the ultra-conservative Christian Union – it’s likely the latter two would be even more opposed to dual nationality than he is.

One of the organisers of the dual nationality petition, Eelco Keij, said the outcome of the coalition talks could yet change, and he pledged to increase the pressure for reform when a new government takes office.

“Dutch people living abroad know they are part of an international community”, he replied to the prime minister.

“Continuing to cling onto single-nationality status for no reasonable reason creates only losers in this globalised world.”

Last month, British prime minister Theresa May said all 3,000,000 EU citizens living in the UK would be able to apply for inclusion on a “settled status register” after Brexit – though the EU’s lead Brexit negotiator, Michel Barnier, said he needed more clarity and better guarantees.

On the other side of the North Sea, uncertainty about their future status for the estimated 85,000 British nationals living in the Netherlands led some 120 of them to begin applying for Dutch nationality.

While that’s a tiny percentage, one immigration expert suggested that 95 per cent of British residents in the Netherlands would like more information on issues such as pension entitlements – but with two years to the talks’ completion line of March 2019, they regarded it as far too soon to take irreversible action.

Meanwhile, the challenges of Brexit for the Irish and Dutch economies will be discussed at a seminar in Amsterdam in September, organised by the Ireland-Netherlands Business Association and the Irish embassy. It will be attended by business and government representatives from both countries.

1 Joe Biden does not want to see guarded Border in Ireland after Brexit
2 Bloomberg ranks New Zealand top in fight against Covid-19 - but how did Ireland fare?
3 Covid-19: Museums, cinemas set to reopen next week as Varadkar warns of New Year restrictions
4 Shops, hairdressers and hotels expected to reopen next week
5 Miriam Lord: Unity and common purpose in spades but not for Covid fight
Real news has value SUBSCRIBE