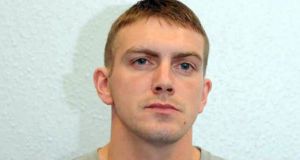 A Royal Marine built explosives for an Irish republican paramilitary group planning to attack police stations and kill officers, a has court heard.

Ciaran Maxwell (31) stashed anti-personnel mines, mortars, ammunition and 14 pipe bombs – four of which were deployed – in purpose-built hides in Northern Ireland and England.

Chemicals and materials to make more bombs, as well as an adapted Police Service of Northern Ireland (PSNI) pass card, a PSNI uniform and a police stab-proof vest were found in the barrels and buckets buried in the ground.

Maxwell, of Exminster in Devon, compiled a library of terrorist documents and bomb-making guides – such as the Irish Republican Army “Green Book” – and researched targets, including police stations, military barracks and government buildings, the Old Bailey was told.

The serviceman, who is originally from Larne in Co Antrim, claimed after he was arrested on August 24th last year that he had “got in over his head” and had no intention of committing an act of terrorism or killing anyone.

But prosecutor Richard Whittam QC said: “Mr Maxwell repeatedly accepted that the devices would be used by others for terrorist purposes. For example, he agreed with the statement that the items were made for the Continuity IRA (CIRA) with the intention of attacking police and police stations.”

Maxwell faces years behind bars when he is sentenced on Friday after pleading guilty in February to preparation of terrorist acts between January 2011 and August last year, possessing images of bank cards for fraud and possessing cannabis with intent to supply.

He appeared in court on Wednesday by video link from Woodhill prison in Milton Keynes, where he sat at a desk with a laptop, making notes.

The Royal Marine was serving with a commando unit based at Norton Manor Camp in Taunton at the time of the offences and was deployed in the United States, Cyprus and the UK – but not Northern Ireland – after enlisting in 2010.

The court heard that dissident republicans have carried out more than 160 terrorist attacks since 2010 and it was “commonplace” for Northern Ireland-based terrorist groups to conceal bomb-making equipment and other terrorist material in purpose-built hides.

But Mr Whittam said: “The number of hides in this case, their geographical dispersal, their attribution to a single person constructing and managing them, and the amount of material stored within them, would be highly unusual.”

He added: “It is our case that some of the items inevitably must have been taken from the UK to Northern Ireland by this defendant and it may be that, when travelling between England and the UK, bearing in mind the identity cards he would have had and his position, his passage would have been easier than others to take items with him.”

The sentencing hearing, which is scheduled to last three days, continues on Thursday.