The world's tallest statue which portrays one of the founding fathers of India, Sardar Vallabhbhai Patel, will be unveiled by Prime Minister Narendra Modi in his home state of Gujarat on Wednesday (October 31). 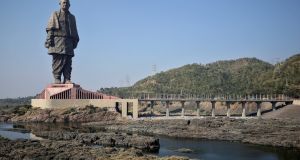 A general view of the “Statue of Unity” portraying Sardar Vallabhbhai Patel, one of the founding fathers of India, during its inauguration in the western state of Gujarat. Photograph: Amit Dave/Reuters

The 182m high, three-tiered bronze-clad tribute to Sardar Vallabhbhai Patel is twice the height of the Statue of Liberty and 54m higher than the Spring Temple Buddha in China, which at 128m was previously the world’s tallest. It was build at a cost of €355 million.

“The height of the statue is to remind the youth [of India] that the future of the country will be as huge as this,” Mr Modi declared at the inauguration ceremony at Kevadiya, 215km south of the state capital Gandhinagar.

It was also symbolic of India’s engineering and technology affordability, Mr Modi said of the monument, as Indian Air Force helicopters showered flowers on the memorial complex and three Jaguar fighters conducted a fly-past.

Dubbed the Statue of Unity and built in 46 months, the controversial statue weighs 67,000 tonnes and has been built to withstand major earthquakes and high-velocity winds.

More than 210,000 cubic metres of concrete, 25,000 tonnes of steel and 1,700 tonnes of bronze cladding were used in its construction. It also comes with a 135m-high viewing gallery capable of accommodating 200 visitors at one time.

Local farmers, however, protested against the memorial, claiming the Gujarat government had not paid them adequately for the land they forcibly acquired for it.

Tribal communities from the region, displaced to facilitate the project, also said that the resources “lavished” on the statue were a waste and could have been put to better use.

The memorial has long been an ambition of Mr Modi’s. Like him, Patel was a Hindu from Gujarat, even though he belonged to the rival opposition Congress Party.

But Mr Modi and members of his Bharatiya Janata Party (BJP) believe Patel was in reality a “closet Hindu nationalist” who was “calculatingly marginalised by the Congress Party and his rightful place in history overlooked”.

The BJP propagated the view, which has been debunked by historians, that despite his competence Patel was done out of independent India’s premiership by Mahatma Gandhi, who instead selected the anglicised Jawaharlal Nehru for the post.

While campaigning for the 2014 general elections Mr Modi said that every Indian regretted that Patel had not become India’s prime minister instead of Nehru.

Patel, who died seven years after India’s independence in 1950, had earned the appellation of “Iron Man” after he persuaded more than 500 maharajas and rulers to unite and become part of one country.

He was also reputed to be a stern, highly principled and decisive politician and his opposition to Hindu nationalism is well recorded.

Patel’s statue, however, will not remain the world’s tallest for long.

An even higher one – at 210m – is planned off Mumbai’s coast to celebrate the 17th century Hindu warrior king Shivaji, who successfully battled Mughal rule in western India with his guerrilla warfare tactics. That statue complex is expected to be completed by 2020.