Man stabs colleague in Antarctica because of book spoilers 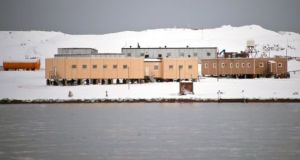 The Russian Bellingshausen station in Antarctica, the site of the alleged stabbing. Photograph: Vanderlei Almeida/AFP/Getty Images

A researcher at Russia’s Antarctic station stabbed a kitchen knife into his colleague because he was “fed up with the man telling him the endings of books”.

Investigators say that Sergey Savitsky, 55, became angry after Oleg Beloguzov, 52, kept telling him the endings of books, according to the Daily Record.

The duo were avid readers to pass the lonely hours spent at the outpost.

The victim is now in intensive care after being flown from Russia’s Bellingshausen research station on King George Island to Chile with a knife injury to his heart.

Interfax new agency said the assailant later voluntarily surrendered to the chief of the station and was placed under house arrest.

The agency said that the incident had resulted from “tensions in a confined space”.

The Bellingshausen Station was founded by the Soviet Union in 1968 and is named after a 19th-century Russian explorer of the Antarctic.