Protesters fear reforms will leave them vulnerable to powerful corporations 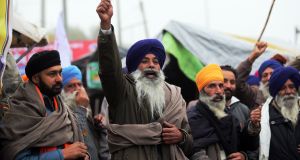 Farmers protest in Amritsar, India, against the new agriculture laws which they fear will disrupt their business and strip them of state protections. Photograph: Raminder Pal Singh/EPA

India’s supreme court has suspended three agriculture laws that have provoked farmers to stage a mass protest against prime minister Narendra Modi and block roads leading to the capital.

The court’s decision on Tuesday to put the laws on hold came a day after it said it was “extremely disappointed” by how Mr Modi’s government had introduced the reforms and the manner in which it had conducted the ensuing negotiations.

“We are going to suspend the implementation of the three farm laws until further orders,” said chief justice Sharad Arvind Bobde.

Thousands of farmers have been camping on the outskirts of New Delhi for weeks, clogging the main entry points into the city to protest laws aimed at deregulating the country’s agricultural markets and encouraging private competition.

The farmers fear the reforms will disrupt their business and strip them of state protections, leaving them vulnerable to powerful corporations.

“We want a complete rollback of these laws,” said Harinder Happy, a media co-ordinator working with the protesters, who said that the farmers unions would meet later on Tuesday to discuss the order and next steps.

The supreme court said it planned to set up a committee of experts to “amicably resolve” the stand-off.

But experts were sceptical that farmers would agree to co-operate with the committee because “the supreme court does not have the power to nullify the act, it can only do so on constitutional grounds”, said Mr Himanshu, an associate professor of economics at Jawaharlal Nehru University in New Delhi.

“I don’t know whether the farmers unions will even engage with them,” said Mr Himanshu. “They [the Modi government] are simply buying time.”

The farmers, many of whom are from India’s Sikh religious minority, have been camping on roads leading into New Delhi for more than a month. Despite holding more than eight rounds of talks, the government has failed to defuse the stand-off with the protesters.

The government maintains that the new laws will help modernise India’s agricultural sector, which supports more than half of the country’s mostly rural population, and is in desperate need of reform.

It says the reforms will allow private trade outside state-regulated market yards and open up contract farming between producers and companies. According to Narendra Singh Tomar, the agriculture minister, the legislation “will ultimately lead to a better life and enhancement of their incomes”.

But farmers remain suspicious after the government pushed through the reforms in parliament without consultation.