As election looms, lack of funding from government at heart of state’s inability to tackle Covid-19 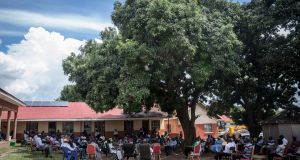 For most of 2020, Santos Okot Lapolo, the chairman of the coronavirus taskforce in Gulu, northern Uganda, presided over weekly meetings under a mango tree.

Among the problems brought to him were coronavirus patients threatening to go on strike or escaping from hospital because of a lack of food and water; medical staff not being paid for weeks; and there being not enough working vehicles, ICU beds, thermometres, or money for fuel.

Though the east African country has managed to keep its official number of coronavirus cases relatively low, regional parts of Uganda have struggled with a lack of resources to respond to the pandemic, with many local officials blaming the central government for gobbling donations and failing to share them.

On Saturday, Lapolo himself died of the disease.

As Uganda readies for elections on Thursday, coronavirus-related restrictions are being used as an excuse to oppress and muzzle opposition. Presidential candidates have been arrested and jailed or forbidden to campaign, with the pandemic given as the reason. They argue that the same rules aren’t being applied to the ruling party. In November, after presidential candidate Bobi Wine was arrested and accused of spreading disease, protests broke out and at least 54 civilians were killed by security forces.

“This was not about Covid. Make no mistake about this,” said Kizza Besigye, a veteran opposition leader who has run for election four times, at a press conference in central Kampala on Tuesday. “The regime is not worried about Covid at all actually.”

In the middle of this, the real Covid-19 victims are going largely unnoticed.

“It’s pretty clear I think – Covid is everywhere,” said Nicolas Laing, a doctor and the founder of OneDay Health, which aims to improve rural healthcare in northern Uganda. “Over 20 per cent of Ugandans have most likely had coronavirus already.” Despite this, he said, few people are dying, “apart from a handful of older people, and those with co-morbidities”.

However, the situation in Gulu, an impoverished city in Uganda’s north, highlights how victims of the virus are doing without the support needed.

In September, Gulu’s hospitals ran out of space and started rejecting patients.

“Cases are calling me left and right and some promising to commit suicide,” a member of the city’s coronavirus task force wrote in their WhatsApp group at the time.

That same month, Covid-19 patients in hospital threatened to go on “strike” because they weren’t being fed, and they had been given no water to drink or wash for days.

The city became an “epicentre” of disease, the task force announced, because it was receiving truck drivers found to be positive during mandatory testing at the nearby South Sudanese border. For more than six months, these were the only people officially allowed to enter the country, under government regulations.

A major problem was a lack of funding from the central government. In May, 2020, 272 million Ugandan shillings (€60,000) was sent to each of Uganda’s regional referral hospitals. This money was supposed to cover contact tracing and health worker allowances, as well as all other costs. But further funds weren’t readily distributed.

During an interview in his office in September, Dr James Elima, the director of Gulu Regional Referral Hospital, said it just received another 100 million Ugandan shillings (€22,000). “Peanuts,” he complained, adding that the hospital was accumulating debt, particularly with the cost of feeding patients, which had come to more than 200 million shillings (€44,000).

Health workers working with Covid-19 patients hadn’t been paid, he said. “They will periodically be paid [but] it’s not on time. We pay what we have . . . And if we don’t have [their payment] they continue working.”

Officially, Uganda has just over 37,800 confirmed coronavirus cases and 302 deaths, but anecdotally, the figures seem much higher. Among those suspected to have died of Covid-19 are four MPs.

William Onyayi, Gulu’s district health educator, told The Irish Times there is not enough capacity to test enough people, though they are certain that cases are increasing. “The level of our testing has gone down [but] in the community many people seem to be infected,” he said.

There are 12 ICU beds in the regional referral hospital, which is also not enough, he added, speaking by phone on Tuesday. Ministry of health officials say only 35 per cent of those who go to Ugandan ICUs with coronavirus survive.

Gulu has previously experienced an Ebola outbreak, but its healthcare workers say the Covid-19 pandemic is much tougher to beat, because of the lack of resources.

This week, the city’s coronavirus taskforce members took to WhatsApp to share their memories of Lapolo.

“Fare thee well, great servant,” one member wrote. “You fought a good fight for us and never relented even in the fiercest moments.”

“The dark cloud indeed still hangs above us, [as shown by] the sudden demise of the senior citizen and statesman due to the ruthless contagion,” wrote another.

Onyayi mourned Lapolo as “a person who had been number one in ensuring that Covid-19 did not spread to the community. He was doing all that he could do,” he said. “We have lost all the support which he used to give us.”

This story was produced in collaboration with Journalists for Transparency, a project of Transparency International, and 100Reporters, a US-based nonprofit news organisation