India claims space power status as it shoots down satellite 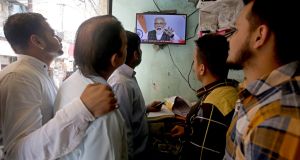 India claimed on Wednesday to have successfully shot down one of its own satellites with an indigenously developed anti-satellite missile, making it the world’s fourth country to develop and demonstrate this advanced capability after the US, Russia and China.

He said that in less than three minutes the missile had destroyed a satellite 300km away.

Mr Modi said space should not be an “arena for warfare”, but that India needed to be able to defend itself, and it was with this resolve that it had conducted the missile test.

Details of the test were sketchy not only from the prime minister, but also from the agencies and departments involved. Official sources, however, said the interceptor missile did not carry any explosives or incendiary devices, but rather was a “kinetic kill vehicle” that rammed into the satellite, shattering it in low Earth orbit.

They also said that the missile, powered by two solid-propellant rocket boosters, was a part of India’s ballistic missile defence system, which is under development. The destroyed satellite is believed to have been one of two Earth-observation satellites launched by the ISRO over the past 15 months.

India’s foreign ministry played down the missile test and dismissed the notion that the country was entering into an arms race in outer space.

In an official statement it declared that the test was not directed against any country and had been executed to “ensure national security interests” and to provide a credible deterrence against threats to the country’s growing space-based assets. It also said India was merely verifying its anti-satellite missile capability.

Military experts, however, said it was difficult to view the anti-satellite missile as peaceful or for self-defence because of the tremendous consequences of its employment and the sophistication of its underlying technology.

“This missile capability catapults India strategically into a different league,” said former lieutenant general Vijay Kapur. It was a capability that would need to be exercised with caution and maturity, he warned.

He was making a veiled reference to India’s nuclear rivals Pakistan and China, the latter of which destroyed a weather satellite in 2007, creating the biggest orbital debris in history and endangering other satellites in space. China’s anti-satellite missile test helped to embolden India in pursuing its own ambitions in this area.

Pakistan on Wednesday condemned the militarisation of space and, without naming India, said that boasting of such capabilities “is reminiscent of Don Quixote’s tilting against windmills”, a reference to the delusional hero of the 17th-century Spanish novel by Miguel de Cervantes.

Opposition parties in India raised questions about the timing of Mr Modi’s announcement, just two weeks before the first round of voting begins in the country’s general election. They accused the prime minister and his Hindu nationalist Bharatiya Janata Party of flouting a code that prohibits political parties from making declarations than can be exploited ahead of voting.

They also reproached Mr Modi for flexing military muscle in a bid to make national security the principal electoral issue in the face of growing unemployment, farmer distress and a stagnant economy over the past five years.

They also accused Mr Modi of taking credit for India’s anti-satellite missile capability, which has evolved over 15 years through successive governments.