US president praises Brazilian leader’s response to the Venezuelan crisis 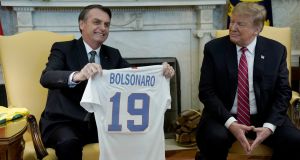 US president Donald Trump declined to rule out military intervention in Venezuela as he met his Brazilian counterpart, Jair Bolsonaro, in the White House on Tuesday.

Speaking alongside Mr Bolsonaro – an admirer of Mr Trump – the US president said “all options are on the table” in regard to Venezuela. “We’ll see what happens,” he added, suggesting that more sanctions could be imposed.

Both the US and Brazil have recognised Venezuelan opposition leader Juan Guaidó as president of the country, in a bid to dislodge Nicolás Maduro. But the disputed president remains in power, despite the US having imposed sanctions in January on Venezuela’s state-owned oil company, PDVSA.

In a joint press conference in the White House Rose Garden, Mr Trump praised Brazil’s response to the Venezuelan crisis, describing the situation in the neighbouring country as “terrible” – “no food, no water, no air conditioning, no power”, he said.

“Mr Bolsonaro has been an extraordinary leader in supporting the Venezuelan’s people’s efforts to reclaim their liberty and democracy.”

He described Mr Maduro as “really nothing more than a Cuban puppet”, adding that the “twilight hour of socialism has arrived in our hemisphere”.

“The last thing we want in the United States is socialism,” he said.

Mr Bolsonaro praised Mr Trump profusely. Remarking that he had always admired the US, he said this admiration had increased since Mr Trump took power.

He finished his prepared remarks to the media by urging the two countries to “stand side by side in their efforts to ensure liberty and respect for traditional family lifestyles, with respect to God ... and against politically correct attitudes and against fake news”, adding that he “fully” believed Mr Trump would be re-elected in 2020.

Noting that he had “many views that are similar” to the Brazilian president, Mr Trump said he was “proud to hear the president use the term fake news”.

Asked about regulation of tech giants, Mr Trump expanded on a tweet he had sent earlier in the day in which he accused social media companies of harbouring an anti-conservative bias.

“It seems to be if they’re conservative, if they’re Republicans, if they’re in a certain group, there’s discrimination, and big discrimination, and I see it absolutely on Twitter and Facebook. and others,” he said. “We use the word ‘collusion’ very loosely all the time, and I will tell you there is collusion with respect to that because something has to be going on.

“I have many, many millions of followers on Twitter,” he said. “It’s different than it used to be. Things are happening. Names are taking off. People aren’t getting through.

“I do think we have to get to the bottom of it,” he added. “It’s fair to say we have to do something about it.”

Mr Bolsonaro, a former army general, took office on January 1st on a promise to crack down on drug gangs and to restore traditional family values to Brazil.

Earlier, as he presented Mr Trump with a Brazil soccer jersey in the Oval Office, he said it was his great pleasure to meet Mr Trump, particularly after what he described as decades of “anti-US” presidents in Brazil.

The US president congratulated his Brazilian counterpart on his recent election. “[He] has done a very outstanding job, ran one of the incredible campaigns, somebody said it a little bit reminded people of our campaign, which I’m honoured by,” he said. “Brazil and the United States have never been closer than they are right now. I think there was a lot of hostility with other presidents. There’s zero hostility with me.”

The US president also said he intended to designate Brazil a non-Nato ally or “even a Nato ally”.