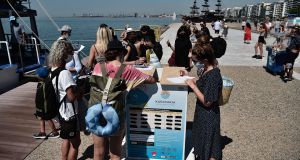 Tourists wear protective face masks as they fill in a form for the the novel coronavirus before embarking on a small cruise boat along the waterfront of the northern city of Thessaloniki, Greece, on August 31st. Photograph: Sakis Mitrolidis/AFP

The European Commission has announced funding of €400 million towards a World Health Organisation (WHO) vaccine initiative as global authorities grapple to gain control of the pandemic and brace for difficult winter months.

The virus has killed more than 840,000 people around the world and a surge of cases in India brought the number of global cases to more than 25 million since the outbreak of the pandemic, with current epicentres in Latin America and the United States.

On Monday, the commission announced the pledge to the WHO’s COVAX initiative, which aims to purchase two billion doses of potential Covid-19 shots from several vaccine makers by the end of 2021, for distribution to all countries.

“Global collaboration is the only way to overcome a global pandemic,” said European Commission president Ursula von der Leyen in a statement. “The most talented researchers and organisations are pooling their efforts to deliver vaccines, tests and treatments, which will be our universal, common good.”

The EU’s executive body is separately negotiating advance purchases of Covid-19 vaccines with several pharmaceutical companies on behalf of the 27 member states.

It comes as countries grapple with what rules and restrictions can best contain the disease while allowing ordinary life to continue as much as possible.

Italy is negotiating the introduction of compulsory testing of people arriving from and travelling to France and Spain. “I believe that this could be a choice that protects people,” said ministry of health undersecretary Sandra Zampa.

Meanwhile, Hungary is to close its borders to non-residents outright from Tuesday in a bid to curb the spread of the virus.

“There is a risk of introducing the virus and most of the new infections are of foreign origin,” said Gergely Gulyás, chief of staff to prime minister Viktor Orbán, as he announced the measure.

Free testing is to be made available across Paris as France deals with a steep rise in coronavirus cases, with 21 areas of the country now classed as “red zones”, in which the virus is actively circulating.

French schoolchildren aged 11 and above are adapting to attending school while wearing masks, following advice from the WHO that children aged 12 and up should wear face masks where distancing is not possible. Paris has introduced compulsory mask-wearing in all public places, while competitors of the Tour de France, which began in Nice this weekend after a two-month delay, are also required to wear masks at all times when not competing and will be regularly tested for the disease.

In Britain, police broke up an illegal rave in a forest in eastern England over the weekend, after authorities introduced new penalties to clamp down on “serious breaches” of rules, including fines of £10,000 (€11,200), meaning people who organise unlawful gatherings of more than 30 people.

The academic University and College Union said that the movement of more than a million students to begin their studies could be a “recipe for disaster” and warned against the resumption of face-to-face teaching.

“There is far more of a risk than perhaps the general public has appreciated,” said union representative Jo Grady, who warned that Britain’s universities were not prepared.