Biden accuses Trump of ‘rooting for chaos and violence’

In a speech delivered in Pennsylvania, his first since the Democratic National Convention two weeks ago, Mr Biden said that the president had “long ago forfeited any moral leadership in this country." Video: Reuters 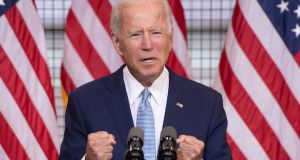 Joe Biden: Trump ‘can’t stop the violence, because for years he has fomented it’.

Democratic presidential candidate Joe Biden has denounced Donald Trump’s response to the recent wave of violence in the United States, accusing him of “rooting for chaos and violence”.

In a speech delivered in Pennsylvania – his first since the Democratic National Convention two weeks ago – Mr Biden said that the president had “long ago forfeited any moral leadership in this country. He can’t stop the violence, because for years he has fomented it.”

“Does anyone believe there will be less violence in America if Donald Trump is re-elected?” he asked.

Mr Biden was speaking as the debate about racial justice and policing has reached a new pitch following violent clashes in cities like Kenosha, Wisconsin, and Portland, Oregon.

Mr Biden called out Mr Trump for not denouncing his own supporters who have demonstrated publicly while heavily armed in recent days. “He may believe mouthing the words law and order makes him strong, but his failure to call on his own supporters to stop acting as an armed militia in this country shows you how weak he is,” Mr Biden said.

The former vice-president took issue with many of Mr Trump’s characterisations of him, particularly on the theme of law and order. He said he was not a “radical socialist”, but rather wanted to keep the US “safe from Covid, safe from crime and looting, safe from racially-motivated violence, safe from bad cops . . . safe from four more years of Donald Trump,” he said.

“I believe if I was president today, the country would be safer and we would see a lot less violence,” he said, predicting that he could bring those fighting for racial justice, and the police, to the table.

Speaking in a former steel mill that has been converted into a sustainable development site, Mr Biden also said he did not support a ban on fracking, as claimed by his Republican rival.

Pennsylvania, which Mr Trump won in 2016, is a key target for Democrats in the run-up to the election. Mr Biden announced his run for presidency in Pittsburgh in April 2019, and during his speech on Tuesday reminded Americans that he was born in Scranton, a small city in the eastern part of the state.

As members of the Biden campaign privately warned that Mr Trump is seeking to highlight crime and policing as an election issue in a bid to deflect from coronavirus, Mr Biden noted that the US is now on track for more than 200,000 deaths due to Covid-19.

“More cops have died from Covid this year than have been killed on patrol. Nearly one in six small businesses is closed in this country today,” he said. “Do you really feel safer under Trump?

Cases of coronavirus in the United States have passed six million, with areas of the midwest like Iowa and Minnesota now reporting a steep increase in infection rates.

Mr Trump retweeted a post by a supporter of Q-Anon – a right-wing conspiracy theory group – claiming that the death rate from coronavirus was actually closer to 9,000, though the original tweet was later deleted by Twitter for violating the platform’s rules.

The social media company has previously labelled some of the president’s tweets about the virus as potentially misleading or false.

Mr Trump also retweeted a tweet calling for New York governor Andrew Cuomo to be imprisoned over his handling of coronavirus. Mr Cuomo later wrote in a tweet that  “the White House has learned nothing from Covid”.