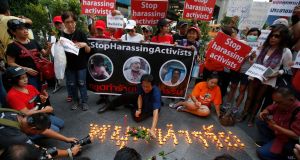 Sirawith Seritiwat, a democracy activist, was running to catch a bus when the men attacked, battering his head until his eye socket was fractured, his nose was broken and his eyes were bathed in blood.

Sitting near his hospital room in Bangkok, with the glare of fluorescent lights and the reek of disinfectant in the air, Patnaree Chankij, Sirawith’s mother, said she considered her son lucky. “I’m smiling because my son is not dead,” she said. “He is fearless and will keep fighting for what he believes in.”

Over the past few months, as Thailand has been transitioning from rule by military junta to rule by a newly elected leadership dismissive of many tenets of democratic governance, a band of activists has argued that the country deserves more than flawed elections and cowed citizens.

Their peaceful campaigning – small rallies in parks, Facebook posts and the odd protest anthem – has been met by intimidation, both physical and legal.

The June 28th assault against Sirawith, who had already been beaten up less than a month before, is one of about 10 cases over the past year in which democracy activists have been attacked by unknown assailants.

Even more alarming, dissidents who had lived in self-imposed exile in neighbouring Laos have turned up dead in the Mekong river with concrete stuffed in their bellies. No one has been brought to justice for these crimes.

“Violence by thugs against pro-democracy activists has become a dangerous new trend in Thailand,” said Brad Adams, the Asia director of Human Rights Watch. “The failure of Thai authorities to seriously investigate these assaults both encourages future attacks and suggests a possible role by officials.”

On Wednesday, Amnesty International sent open letters to Thai officials calling for swift action. Like many other political activists, Sirawith (27) has also been embroiled in various court cases, with charges ranging from forming illegal political gatherings and being in contempt of court to contravening the nation’s notorious Computer Crime Act.

“Because there are so many court cases, I can’t remember exactly what each one is for but I know that the charges against him are ridiculous,” said Weerachai Fendi, a friend of Sirawith. Weerachai also faces his own legal challenges.

Thailand is best known abroad as a welcoming vacation destination, a tropical idyll that seems to somehow float above the political dysfunction that has given rise to repeated military coups, student massacres and street protests. The latest election, which took place in March, resulted in Prayuth Chan-ocha, the leader of the military junta that masterminded a coup in 2014, keeping his post as prime minister.

But election observers have questioned the sanctity of the vote, and the balloting’s scope was limited from the start by an army-drafted constitution that calls for an appointed senate, among other anti-democratic provisions.

More than 100 days after the election, Prayuth is now trying to form a government, but his efforts have been foiled by in-fighting among his coalition. Sirawith is a soft-spoken political science graduate from one of Thailand’s top universities. Unlike many of his fellow students at Thammasat University, however, he was raised by a mother dependent on odd jobs for survival. Her latest occupation is as a fortune teller.

Thailand has one of the biggest gaps between rich and poor among major economies, and the nation’s vast underclass has consistently voted for a political bloc that has been twice removed from power by coups. Deputy prime minister Prawit Wongsuwan denied that the military-backed government had anything to do with the string of attacks on prominent democracy campaigners.

One pro-military legislator suggested on Facebook that the attack on Sirawith may have been carried out by his “own supporters to spur public outcry”. Sirawith was supposed to have travelled to India this month to begin graduate studies in political science.

Thailand’s dissident class includes students, professors and lawyers. Last month, high-school classmates, a comedian and a French citizen were pressured to dissociate themselves from social media posts that were seen as mocking the country’s military leaders.

“The Thai junta obviously has no sense of humour since even the slightest ridicule can result in thuggish intimidation or threats of prosecution,” said Adams, of Human Rights Watch.

In a gritty neighbourhood of Bangkok, veteran political activist Aekachai Hongkangwan lives under self-imposed house arrest, carefully locking his new gate every time a visitor enters his home. Since January 2018, he has been attacked seven times, often by men on motorcycles with helmets obscuring their faces. Twice his car has been burned.

Most recently, his hand was broken and face beaten after four men surrounded him in May after he appeared in court for one of several cases against him. While police have promised to look into the multiple attacks, most have gone unpunished.

“What happened to Ja New, it shows that things are getting more frightening,” Aekachai said, referring to Sirawith by his nickname.

Already, Aekachai has been jailed for his dissent and whisked off to army bases at sensitive times when authorities were worried that he would carry out one of his trademark one-man protests. “Attacking someone like that, it’s not a joke,” he said.

Back at the hospital where Sirawith is recovering, a group of democracy activists gathered in the lobby last Tuesday and raised their fingers in a three-fingered salute. The gesture of resistance, borrowed from the science-fiction series The Hunger Games is considered such an act of defiance that Thais who dared to flash it have been detained by authorities.

“They want to bully us,” said Weerachai, Sirawith’s friend and fellow activist, his voice barely above a whisper. Strange men have followed him, too, he said, as he walks home at night or goes out for a bite to eat. “I’m scared about my safety, of course,” he said. “But we won’t stop.” – New York Times