Hong Kong: China jails 10 who fled by boat to Taiwan for up to three years 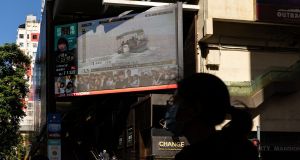 A news report on China’s jailing of 10 Hong Kong activists for illegal border-crossing is shown on a public screen in Hong Kong. Photographer: Chan Long Hei/Bloomberg

Ten people who tried to flee Hong Kong for Taiwan have been sentenced in a Chinese court to up to three years in jail, while two minors have been returned to to Hong Kong police custody.

On Wednesday, the Yantian people’s court ordered the group to serve varying sentences of between seven months and three years in jail. Of the two people charged with organising the illegal border crossing, Tang Kai-yin was sentenced to three years and fined €2,493.62 (RMB20,000), and Quinn Moon to two years and fined €1870.22( RMB15,000).

The remaining eight people, all charged with illegally crossing the border, were jailed for seven months and fined €1246.81 (RMB10,000.)

The court said Mr Tang purchased the boat, and he and Ms Quinn planned to smuggle the passengers from Hong Kong to Taiwan. It said they had been organised by others to commit the crimes, and so were given reduced sentences as accomplices.

All members of the group are believed to have pleaded guilty at the one-day trial on Monday, which was effectively closed to the public, as foreign diplomats and press were turned away from the courtroom. The trial date was announced three days earlier, leaving family members no time to travel to Shenzhen and complete quarantine.

The two remaining members of the group, both aged under 18, were returned into the custody of Hong Kong police on Wednesday morning. The Yantian people’s procuratorate in Shenzhen said after a “non public hearing and investigation” it had decided not to charge the minors after they admitted guilt. The two teenagers will have spent more than four months in prison.

At a press conference in Hong Kong, police said the pair would probably face extra charges for “absconding”.

“Society will take a zero tolerance approach towards anyone who tries to abscond,” said Cheng Lai-kei, the chief superintendent of the commercial crime bureau. Ms Cheng also claimed all detainees in Shenzhen had violated Hong Kong laws, even though none have been tried or convicted, RTHK reported.

The group – dubbed the Hong Kong 12 by supporters and media, and “separatists” by Chinese authorities – were apprehended in the early hours of 23 August, when Guangdong coastguards intercepted their speedboat off the coast of Hong Kong. The 12 onboard, aged 16 to 33, were allegedly bound for Taiwan, fleeing charges related to the 2019 protests. Among the passengers was Andy Li, an activist who had been arrested under the draconian national security law, suspected of foreign collusion.

Li’s sister Beatrice told the Guardian the families could not comment on a sentence when they knew nothing of the case or trial and still could not speak to the detainees.

“We have to remember that they were locked up in China, cut off from the world, their families and lawyers of their choosing for four months before attending a mock trial full of puppets of Beijing,” she said. “For all we know they could’ve been forced to admit to whatever accusations – in exchange for a less than maximum sentence.”

Beatrice called for greater attention on Mr Tang and Ms Quinn, who she said were feared to be having health issues.

The Hong Kong government has said mainland authorities told it the boat left Po Toi O at about 7am, crossing into mainland territory half an hour later, where it was intercepted 26 nautical miles outside of Hong Kong waters. However, with few details provided by Chinese authorities suspicions have persisted that the boat was not yet in Chinese waters.

The group was taken to Shenzhen on the mainland, and their families and Hong Kong authorities were not informed until days later. According to their relatives, they were cut off from contacting the outside world, denied medication, and their chosen lawyers refused access. Other mainland lawyers alleged authorities had tried to pressure them into not representing their clients. In November, families received letters from the detainees, but the contents only increased their concerns.

It was not until mid-December that they were eventually charged. Two were accused or organising an illegal border crossing, and a further eight of carrying it out. Two of the group are minors, and while authorities said their cases would be heard in a closed door session at a later date. On Wednesday, it was revealed they would instead be returned to Hong Kong.

The arrests became a flashpoint for the pro-democracy movement, which was and still is being heavily targeted by authorities. Since the introduction of the national security law in June, dozens of people have been arrested, and high-profile activists jailed or forced into exile. –Guardian