Uganda mired in violence against opposition supporters ahead of election 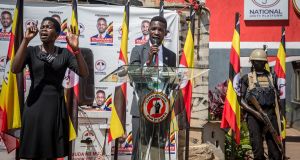 Ugandan presidential candidate Bobi Wine has said the only way to avenge his murdered supporters is to “liberate” Uganda, days after one of his bodyguards died during a confrontation with security forces.

Opposition activists accuse the military of driving a truck over 25-year-old Frank Senteza Kalibala, who was killed in the incident on Sunday. The army denied this, saying the death was accidental. Police denied this andsaid in a statement they had begun court proceedings to allow them to exhume Kalibala’s body to enable them to conduct an investigation.

The incident happened shortly after several Ugandan journalists were badly injured by security forces, including 28-year-old Kasirye Ashraf, who has live-streamed Wine’s campaign events for more than a year. Ashraf was hit with a projectile at close range, shattering his skull, and is being treated in hospital.

Uganda’s most anticipated election in decades is due to take place on January 14th. It will pit Wine (38), a popular musician whose real name is Robert Kyagulanyi, against Yoweri Museveni, the 76-year-old former rebel commander who has been in power since 1986 and initially promised a return to democracy.

Wine’s candidacy has inspired citizens across the nation, which has one of the youngest populations in the world. The pop star and MP – who called Museveni a “hypocrite” and a “coward” on Tuesday – says his mission is to “remove a dictator”.

As the election draws closer, repression is increasing.

Wine is one of several prominent opposition figures involved in cat-and-mouse games with the authorities: repeatedly being arrested, bailed and taken in for court hearings. In November, during protests following his latest arrest, at least 54 Ugandans were killed by security forces, though opposition activists say the real number is much higher.

On December 22nd, Nicholas Opiyo, one of Uganda’s best-known human rights lawyers, was arrested on charges of money laundering, which colleagues say are fabricated.

Four days later Uganda’s electoral commission announced that campaigning would be banned in 12 of the country’s most populous cities and districts, including the capital, Kampala. Though this was ostensibly to stop the spread of coronavirus, opposition say it is an attempt to control them. Wine says he will continue to campaign despite the ban.

At Wine’s headquarters in Kamwokya, central Kampala, on Tuesday, supporters wearing the red clothes associated with his “people power” movement gathered to hear the latest instructions from their candidate. As they waited, they listened to Wine’s songs Rise Up and Freedom on repeat. Police and the military blocked off the surrounding roads.

When Wine took to the podium, wearing a grey suit and red tie, he directed his remarks at the government. “All this that you’re doing to us is only giving us more reason to fight on,” he said, to cheers. “[How] do you think we can pay for Frank’s life other than accomplishing his mission? So do what you are doing, torture as many people as you can torture, before we kick you the hell out.”

Wine also included a message for the international community, including aid donors and countries that trade with Uganda. “Please don’t let the people of Uganda suffer in the darkness, we are part of the human family,” he said.

“I’ve been calling upon you ... to make the observation of law and respect for human rights a precondition to co-operation with Uganda. Don’t consider being seen as partners in crime with a brutal dictatorship led by President Museveni.”