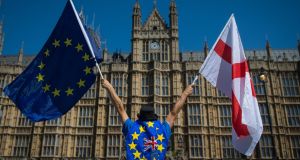 British prime minister Boris Johnson will tell MPs the Brexit deal shows how Britain can be “at once European and sovereign”. Photograph: Dominic Lipinski/PA Wire

MPs and peers at Westminster are set to back Boris Johnson’s Brexit deal by overwhelming majorities on Wednesday after Conservative hardliners said they would vote for it. The prime minister will open a debate in the House of Commons, where a Bill implementing the Trade and Co-operation Agreement with the European Union will pass through all its stages in just five hours.

Mr Johnson will tell MPs that the deal shows how Britain can be “at once European and sovereign”, setting its own course while remaining a close friend of the EU.

“Those of us who campaigned for Britain to leave the EU never sought a rupture with our closest neighbours,” he is expected to say.

“What we sought was not a rupture but a resolution, a resolution of the old and vexed question of Britain’s political relations with Europe, which bedevilled our postwar history. First we stood aloof, then we became a half-hearted, sometimes obstructive member of the EU. Now, with this Bill, we shall be a friendly neighbour – the best friend and ally the EU could have – working hand-in-glove whenever our values and interests coincide while fulfilling the sovereign wish of the British people to live under their own laws, made by their own elected parliament.”

The European Research Group (ERG) of Conservative Eurosceptics on Tuesday urged their members to vote for the Bill after a “star chamber” of lawyers said the deal protected British sovereignty. The lawyers, led by veteran Eurosceptic MP Bill Cash, said they were satisfied that the agreement fully respected the norms of international treaties between sovereign entities.

“The ‘level playing field’ clauses go further than in comparable trade agreements, but their impact on the practical exercise of sovereignty is likely to be limited if addressed by a robust government. In any event they do not prevent the UK from changing its laws as it sees fit at a risk of tariff countermeasures, and if those were unacceptable the agreement could be terminated on 12 months’ notice,” the ERG said in a statement.

Labour leader Keir Starmer has told his MPs to vote in favour of the Bill but some backbenchers are expected to defy the whip by abstaining or voting against it. MPs and peers from across the party signed a statement saying the opposition’s duty was to provide proper parliamentary scrutiny and to offer an alternative to Mr Johnson’s agreement.

“That task gets harder if opposition parties fall into the trap of rallying around this rotten deal,” it said.

“We are witnessing an act of vandalism against our livelihoods, our rights and our horizons. We call on Labour, the Labour movement and other opposition parties not to support the Tories’ Brexit deal when it is put to a vote in the House of Commons.”

The signatories included former shadow chancellor John McDonnell and others from the left of the party, alongside pro-European Blairites such as Ben Bradshaw and Andrew Adonis.

The Liberal Democrats, the DUP, the SDLP, Plaid Cymru, Alliance and the Greens will vote against the Bill, which implements the agreements with the EU to give them effect under British law. EU member states agreed by written procedure on Tuesday to apply the agreement provisionally from January 1st pending ratification by the European Parliament a few weeks later.