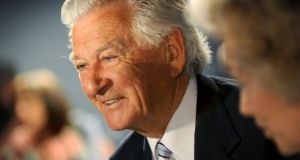 Former prime minister Bob Hawke’s youngest daughter says she was raped by a confidant of her father in the 1980s – but was urged not to report the assaults to protect Hawke’s leadership ambitions. Photograph: William West/AFP/Getty Images

Former prime minister Bob Hawke’s youngest daughter says she was raped by a confidant of her father in the 1980s – but was urged not to report the assaults to protect Hawke’s leadership ambitions.

In claims published by the New Daily, Rosslyn Dillon levelled the allegations against former Labour Victorian MP Bill Landeryou, who died in February, as part of her legal challenge against her father’s €11 million ( $18 million) estate.

In pages of the 25-page affidavit lodged in the New South Wales supreme court published by the New Daily, Dillon alleges she told her father of the assaults at their family home – and he pleaded with her not to go further with the claims.

“You can’t go to the police. You can’t. I can’t have any controversies right now. I am sorry but I am challenging for the leadership of the Labour party,” Ms Dillion reports in the affidavit, adding she was “shocked and hurt” by her father’s request.

“I thought to myself I could not make any bigger sacrifice to [my father’s] political career if I had tried.

“He asked me to let the matter go for him and I did so for him.

“I am still haunted by the sexual assaults. I feel that I may have had a chance to get over these rapes if I was able to report the incidents to police.”

Labour MP Tanya Plibersek said she could not comment on specific allegations, because of the legal action, but said “in the most general terms – anybody who has been the victim of a sexual assault, should be encouraged to take the matter to police to have it dealt with properly, to be thoroughly investigated.”

“I love and support my sister,” she told the publication. “She did tell people at the time. I believe there was a supportive response but it didn’t involve using the legal system.”

Mr Hawke’s will sets out $750,000 for each of his three children and his stepson, Louis Pratt, with the remainder of the estate left to his wife, Blanche d’Alpuget.

Ms Dillon recalls the assaults as happening in 1983, after her father used his influence to secure her employment with Mr Landeryou, who she says was industrial affairs minister at the time. The New Daily reported the timeline outlined in the affidavit did not “add up – unless she is confused about what year she worked for Mr Landeryou”.

The New Daily reports Ms Dillon confirmed she was struggling with substance abuse issues at the time of the alleged assaults.

Mr Hawke first mounted a leadership challenge in July 1982 but was unsuccessful. Bill Hayden resigned as Labour leader in February 1983 with Hawke emerging as the successor.

Hawke went on to win the March 1983 election and became one of the Labour party’s most successful prime ministers.

Ms Dillion is making a $4 millon claim against her father’s estate. – Guardian