Coronavirus: Japan anxious at ease with which it beat outbreak

As people’s lives return to normal, some fear that a surge in cases is around the corner 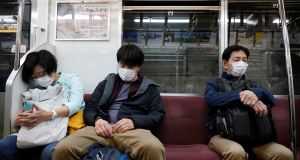 Commuters on a subway train in Tokyo on March 13th. Photograph: Franck Robichon/EPA

This week, Japanese prime minister Shinzo Abe bowed to the inevitable when he accepted the postponement of the 2020 Tokyo Olympics. He made the announcement outside his official residence on Tuesday to a dense huddle of reporters, many of whom returned in taxis or on crowded trains to stuffy offices to file their stories.

The scene told its own story. From being host to the world’s largest cluster of Covid-19 infections outside China just over a month ago, Japan appears to have dramatically reversed the tide.

The European lockdown looks surreal from Tokyo... Dublin, with a fraction of that population, is struggling to deal with more than three times its number of infections.

The European lockdown looks surreal from Tokyo, a teeming city of nearly 14 million people, which has recorded just 171 cases and five deaths. Dublin, with a fraction of that population, is struggling to deal with more than three times its number of infections.

Social distancing is evaporating in the warming spring weather. Trains are crammed in the mornings and restaurants are again filling up. Schools are preparing to reopen in April. Hundreds of thousands of people shrugged off official caution over the last three-day weekend to attend hanami (cherry blossom-viewing) parties in public parks across the capital.

The morning after Abe’s announcement, 600 children and adults gathered at our local primary school for its end-of-year ceremony. Following a gruelling breakfast-table debate, we kept our son, Luka (8), away. A teacher called and said children were wearing masks and sitting apart and there was little to worry about. The previous night Luka spoke by Skype to his granny in Cavan who faces weeks trapped at home, unable to meet her children.

Debate rages about how Japan has pulled this off. High standards of public hygiene have certainly helped – initial reports of the disease in January sparked panic buying of hand sanitisers and surgical face masks. A cultural preference for bowing and business cards over hugs and handshakes may be playing a part at keeping infections low.

The government has repeatedly urged Tokyoites to avoid crowded indoor venues and to keep their distance during conversations. But apart from abruptly sending nearly 14 million children home from school on March 2nd and curtailing large public events, it has largely shunned the draconian measures taken elsewhere.

Unlike South Korea, which introduced heavy-handed mass testing for the virus (and also saw a dramatic fall in new coronavirus cases) Japan has focused on treatment and relied on targeted tests for people with clear symptoms.

Many doctors support that strategy. Crowding hospital waiting rooms with people waiting for tests that most do not need risks spreading the disease further, said Yoshihiro Yamaguchi, a specialist in critical care at Kyorin School of Medicine. “Japan is getting it broadly right,” he said.

Yet, it is too early to say that Japan has ridden out the epidemic. The number of infections is rising in Kansai, the nation’s second-largest economic bloc. Seventy-one new cases were recorded on Tuesday, the highest daily count since the virus reached Japan’s shores. Government experts warned on March 19th that an “explosive” pandemic was still possible.

Many fear that asymptomatic carriers are moving around Tokyo silently infecting others. Yuriko Koike, the city’s governor, warned this week that a surge in infections might trigger a lockdown, depending on what happened in the coming days. “We must avert that at all costs,” she said. She has asked Tokyoites to stay at home this weekend.

Ken Shimura, a ubiquitous TV comedian, sent a shot across the nation’s bows on Wednesday when it was revealed that he is being treated for the virus. He was initially diagnosed with pneumonia.

The cost of getting the strategy wrong on Covid-19 would be immensely high. One in five Japanese people is aged 70 or older. The painful decision (after $12 billion in preparations) to push the Olympics back to 2021 may at least help focus minds, and end suspicions that the government is downplaying the risks of a pandemic to keep the Games on track.

The fact that they have not been postponed since 1944 will drive home the message that Japan is still at war with coronavirus.