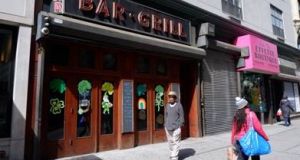 Irish bars, such as O’Keefe’s in Brooklyn (pictured), have had to limit their business to takeout and deliveries since March 16th. Photograph: Kevin Duggan

Little more than a week ago, Co Mayo native Amy Brett was gearing up for the busiest time of the year at the Bailey Pub near Wall Street as St Patrick’s Day dawned. Today, she is back in Cavan, quarantining in a holiday home before returning to her family.

Along with four fellow Irish bartenders who have returned from New York, she is in a 14-day self-imposed quarantine at the holiday home until they are able to return to their families.

For the past five years, Brett has worked in New York bars, which have been brought to a standstill by the outbreak of coronavirus.

Rumours of a closure order by New York mayor, Bill de Blasio floated after organisers postponed the St Patrick’s Day parade down Fifth Avenue for the first time in 258 years.

Together with the four fellow Irish bartenders, Brett immediately made plans to head for Ireland: “I panicked and I thought the best thing to do was to come home. God forbid you’re stuck here,” she said.

The business curbs have devastated bars and restaurants. Already, one prominent company, the Union Hospitality Group has laid off 2,000 employees – about 80 per cent of its workforce – according to a report by the food blog Eater.

A Co Sligo man on a year-long J-1 visa decided to cut his losses and leave his Manhattan bar job: “I could have lasted maybe a month or two, but I would have been out of pocket pretty quickly,” he said.

Unable to be identified because his visa did not allow him work, he came back to Ireland: “I came home and there’s no hugging, it’s all touch elbows and keep your distance. It’s quite a strange way to come back.”

He and many others have had to abandon their apartments, with New York Irish Facebook groups filling up with dozens of listings for rooms in popular Irish neighbourhoods across Brooklyn and Queens in the past week.

The decision of whether to stick out the pandemic, or return home faces many Irish in New York and other places, according to Chicago-based Irish-American immigration attorney Fiona McEntee.

“It’s a pretty scary time and some people just want to be surrounded by their family,” she said, though she cautioned that “the last thing” anyone potentially exposed to the virus should be doing is “to jump on a flight”.

Freelance workers are being particularly affected, says Edelle Kenny, a New York-based producer who works on reality TV shows for American stations like the Discovery Channel and TLC.

“I just had two major contracts dropped, which would be the equivalent of a year’s wage,” she said.

She does not get health and unemployment benefits because she is self-employed: “We’re kind of left in the lurch.”

“You come over here and you start building a life for yourself. Six years is a long time to be here and now you’re thinking, will this just throw everything off, by no fault of your own or anyone’s fault.”

Ms Kenny is also on an interim work permit due to expire in May, while she transitions from a two-year Green Card to a 10-year one and she’s concerned that her immigration case could get caught in a backlog and delays with the authorities.

Some Irish people, however, are stuck in the US because they will not be able to get back in if they leave now: “If you’re not a Green Card holder or a US citizen you do need to think about the immigration aspects of this, especially with the travel ban,” said Fiona McEntee.

For now, Amy Brett and her friends plan to return to New York once it is safe to do so but she said if the situation persists for several months, many more Irish will pack up and leave the city.

“If New York bars don’t reopen by May, you’ll see a lot of people move home to Ireland,” she said.

“But we’re pure anxious, it’s just not knowing when we’re going to go back. New York is home now.”

1 Ireland has strategy to ‘break the chains’ of coronavirus - WHO’s Mike Ryan
2 Coronavirus: Intensive care units ‘may be overrun’
3 UK makes another coronavirus U-turn but doubts over strategy linger
4 ‘Everyone still thinks it’s a joke’ - parents of toddler with coronavirus speak out
5 Impact of Covid-19 on Travelling people: ‘Worst that ever came’
Real news has value SUBSCRIBE