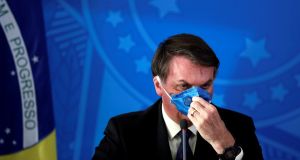 Brazil’s president Jair Bolsonaro: “The virus has arrived and we are fighting it and soon it will pass.” Photograph: Ueslei Marcelino/Reuters

Brazil’s far-right president, Jair Bolsonaro, has claimed he “wouldn’t feel anything” if infected with coronavirus and rubbished efforts to contain the illness with large-scale quarantines as his country’s two biggest cities went into shutdown in a desperate bid to save lives.

In a televised address to the nation on Tuesday night, Mr Bolsonaro slammed what he branded the economically damaging “scorched earth” tactics being used to slow the advance of an illness that has now claimed about 15,000 lives around the world.

“The virus has arrived and we are fighting it and soon it will pass,” claimed Mr Bolsonaro, who is facing a growing backlash in Brazil for repeatedly dismissing coronavirus as a media “fantasy” and “trick”.

Mr Bolsonaro’s incendiary remarks came as both Rio de Janeiro and São Paulo were placed under partial lockdown by municipal and state authorities who fear an explosion of cases in the coming days.

But in his five-minute address – which sparked loud protests in both Rio and São Paulo – Mr Bolsonaro railed against such steps and attacked the media for spreading a “feeling of dread” among the population by reporting on the death toll in Italy.

“Our lives have to go on. Jobs must be kept . . . we must, yes, get back to normal,” Mr Bolsonaro said as his government’s health officials announced that the number of deaths in Brazil had risen to 46 with more than 2,200 cases.

“A small number of state and municipal authorities must abandon their scorched-earth ideas: the banning of public transport, the closing of commerce and mass confinement,” Mr Bolsonaro said.

“What is happening around the world has shown that the at-risk group are those over 60 years old. So why close schools? . . . Ninety per cent of us will show no sign [of infection] if we are infected.”

There was growing speculation on Tuesday that Mr Bolsonaro himself may have been infected with coronavirus amid reports that a military hospital where Brazil’s president had been tested had withheld two names from a list of positive cases for reasons of “secrecy”.

Those reports had set off rumours that Mr Bolsonaro would use his address to confirm a positive diagnosis. Instead he told citizens: “In my particular case, because of my background as an athlete, I wouldn’t need to worry if I was infected by the virus. I wouldn’t feel anything or at the very worst it would be like a little flu or a bit of a cold.”

The address went down badly with many Mr Bolsonaro critics who believe his response to coronavirus will be the end of his political career.