China says 2,051 people infected, 56 dead as US evacuates its citizens from Wuhan 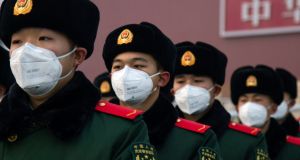 Chinese police officers in Beijing. WHO director-general Tedros Adhanom Ghebreyesus is on his way to Beijing to meet officials and health experts dealing with the coronavirus. Photograph: Betsy Joles/Getty Images

Residents of China’s Hubei province, where the new coronavirus outbreak was first reported, will be banned from entering Hong Kong from Monday as China tries to halt the rapid spread of the outbreak.

China’s cabinet also announced it will extend the week-long Lunar New Year holiday by three days to February 2nd and schools will return from their break later than usual, state broadcaster CCTV said.

Health authorities around the world are racing to prevent a pandemic of the virus, which has infected more than 2,000 people in China and killed 56.

A handful of cases of infection have been reported in other countries, including Thailand, Australia, the United States, France and Canada. No fatalities have been recorded outside China.

The mayor of Wuhan, which is the capital of Hubei province and at epicentre of the outbreak, said he expected another 1,000 new patients in the city, which was stepping up construction of special hospitals.

The newly identified coronavirus has created alarm because much about it is still unknown, such as how dangerous it is and how easily it spreads between people. It can cause pneumonia, which has been deadly in some cases.

China’s national health commission minister Ma Xiaowei said the incubation period for the virus can range from one to 14 days, during which infection can occur.

The Lunar New Year holiday, traditionally celebrated by hundreds of millions of Chinese travelling around the country and abroad to see family, began on Friday but has been severely disrupted by the outbreak.

Mr Ma said China would intensify its containment efforts, which have so far included transport and travel curbs and cancellation of big events.

The virus, believed to have originated late last year in a seafood market in Wuhan that was illegally selling wildlife, has spread to cities including Beijing and Shanghai.

The World Health Organisation this week stopped short of calling the outbreak a global health emergency, but some health experts question whether China can contain the epidemic.

WHO director-general Tedros Adhanom Ghebreyesus said he was on his way to Beijing to meet officials and health experts dealing with the coronavirus.

Chinese-ruled Hong Kong, which has six confirmed cases, will also ban entry from Monday to people who have visited Hubei province in the past 14 days, the city’s government said. The rule does not apply to Hong Kong residents.

Hubei’s governor, Wang Xiaodong, said on Sunday he felt “agonised” and responsible for the outbreak. He described the situation as severe and said medical supplies were still tight.

China confirmed 2,051 cases of infection as of 7pm (1100 GMT) on January 26th, while the death toll from the virus remained at 56, state broadcaster CCTV reported.

Airports around the world have stepped up screening of passengers from China, although some health officials and experts have questioned the effectiveness of these efforts.

Health officials in Orange County, California, said a third case had been registered in the US in a traveller from Wuhan, who was in isolation and in good condition.

On Sunday, China temporarily banned nationwide the sale of wildlife in markets, restaurants, and e-commerce platforms. Wild and often poached animals packed together in Chinese markets are blamed as incubators for viruses to evolve and jump the species barrier to humans.

The US state department said it will relocate personnel at its Wuhan consulate to the US, while Japan was working with China to arrange a charter flight for Japanese nationals to return from Wuhan. About 50 Italians in Wuhan and the Hubei region were offered transport out.

The outbreak has prompted widening curbs on movements within China, with Wuhan, a city of 11 million, on virtual lockdown and transport links all-but severed except for emergency vehicles.

China has called for transparency in managing the crisis, after public trust was eroded by a cover-up of the spread of SARS, a coronavirus that originated in China and killed nearly 800 people globally in 2002 and 2003.