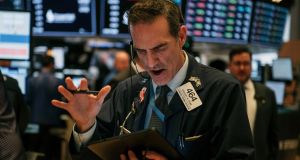 Corrections typically generate hyperbole aplenty, with headline writers petrifying their readers by stressing how stocks have just suffered one of their worst one-day drops in history.

It’s a cheap trick; as LPL Research strategist Ryan Detrick noted after the Dow Jones plummeted by more than 1,000 points, this was the third-worst point drop in history but it only ranked 254th in percentage terms. Still, the coronavirus-inspired selling is remarkable in many respects.

The S&P 500 plunged 10 per cent in just six sessions – the fastest correction from an all-time high in history. It was the worst week for stocks since the financial crisis. Monday and Tuesday’s declines represented the 31st worst two-day drop since 1950 – “pretty gnarly”, as Ritholtz Wealth Management’s Michael Batnick put it.

What’s especially notable is these rapid declines typically occur in bear markets, not immediately after all-time highs. According to market strategist Steve Deppe, it was the worst four-day stretch to follow an all-time high going back to 1950.

This hasn’t been a run-of-the-mill correction; investors are entitled to be spooked, given the sheer speed of the market U-turn.