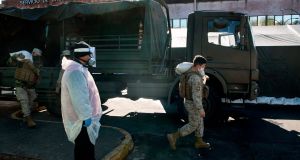 Chilean soldiers carry sand bags to protect the tents set up outside the San Jose hospital to carry out Covid-19 tests, in Santiago on Saturday. Photograph: Martin Bernetti/AFP via Getty

Coronavirus, also known as Covid-19, has now infected more than 7.6 million people worldwide, and killed more than 425,000, according to the Johns Hopkins University tracker.

President of Chile Sebastian Pinera on Saturday replaced health minister Jaime Manalich amid controversy over the country’s figures for deaths from the coronavirus outbreak.

Mr Pinera said Mr Manalich had spared “no effort” in carrying out his “difficult and noble duty” to protect Chileans` health. He replaced him with Oscar Enrique Paris, an academic and medical doctor.

The sudden reshuffle comes as Chile faces its toughest month in the pandemic so far, with spiralling active cases and deaths rates.

The country now has the highest number of confirmed cases per million people in Latin America, reporting 167,355 cases on Saturday and 3,101 deaths.

Mr Manalich, a tough-talking kidney specialist who once ran one of Chile’s top hospitals, has won praise for an aggressive campaign to keep hospitals supplied with ventilators and protective equipment and leading detailed daily press conferences.

But there have been frequent reports of spats among health ministry officials, and Mr Manalich has been criticised by opposition politicians, mayors, medical experts and social groups for refusing to release more detailed contagion data or apply lockdowns sooner and for successive changes in criteria for recording deaths and cases.

On Saturday, a Chilean investigative website, Ciper, reported that the health ministry had told the World Health Organisation (WHO) that as many as 5,000 deaths in the country were linked to coronavirus.

The health ministry’s statistics department reported figures to the global body of people who had died after testing positive for coronavirus test but also deaths suspected to be linked to Covid-19, the respiratory disease caused by the coronavirus.

The new minister, Enrique Paris, is a former head of the Chilean College of Doctors (Colmed) and a university deacon.

Jose Miguel Bernucci, Colmed’s national secretary, welcomed the appointment, saying he was looking forward to a more consensual approach and a “change in strategy to jointly confront the pandemic.”

A Beijing district put itself on a “wartime” footing and the capital banned tourism and sports events on Saturday after a cluster of novel coronavirus infections centred around a major wholesale market sparked fears of a new wave of coronavirus.

Forty-five people out of 517 tested with throat swabs at the Xinfadi market in the city’s southwestern Fengtai district had tested positive for the coronavirus, Chu Junwei, a district official, told a briefing.

None were showing symptoms of the illness, also known as Covid-19, he said, but added that 11 neighbourhoods in the vicinity of the market, which claims to be the largest agricultural wholesale market in Asia, had been locked down with 24-hour guards put in place.

“In accordance with the principle of putting the safety of the masses and health first, we have adopted lockdown measures for the Xinfadi market and surrounding neighbourhoods,” Mr Chu said.

The district is in a “wartime emergency mode,” he added.

The closure of the market and new restrictions come as concerns grow about a second wave of the pandemic, which has infected more than 7.66 million people worldwide and killed more than 420,000.

They also underline how even in countries which have had great success in curbing the spread of the virus, clusters can sometimes easily arise.

The entire Xinfadi market was shut down at 3am on Saturday (8pm on Friday Irish time), after two men working at a meat research centre who had recently visited the market were reported to have the virus. It was not immediately clear how they had been infected.

On Saturday, market entrances were blocked and police stood guard. Beijing authorities had earlier halted beef and mutton trading at the market and had closed other wholesale markets around the city.

They plan for more than 10,000 people at the Xinfadi market to take nucleic acid tests to detect coronavirus infections.

A city spokesman told the briefing that all six Covid-19 patients confirmed in Beijing on Friday had visited the Xinfadi market. The capital will suspend sports events and tourists from other parts of China, effective immediately, he said.

Beijing’s Yonghe temple and National Theatre also announced they would close from Saturday, and the city government said it had dropped plans to reopen schools on Monday for students in grades one through three because of the new cases.

One person at an agricultural market in the city’s northwestern Haidian district also tested positive for the coronavirus, Mr Chu said.

Highlighting the new sense of alarm within the city, health authorities visited the home of a Reuters reporter in Beijing’s Dongcheng district on Saturday to ask whether she had visited the Xinfadi market, which is 15 km (9 miles) away. They said the visit was part of patrols Dongcheng was conducting.

And following reports in state-run newspapers that the coronavirus was discovered on chopping boards used for imported salmon at the market, major supermarkets in Beijing removed salmon from their shelves overnight.

That concern also spread to other cities, with a major agricultural wholesale market in Chengdu, the capital of the southwestern province of Sichuan, saying it would remove salmon products from its shelves from Saturday.

In Nanjing, capital of the eastern province of Jiangsu, a local association of restaurants said it would halt the serving of foods containing raw seafood or animal products.

Some Beijing residents, including a man shopping at a Carrefour supermarket in Fengtai district, said they were confident authorities had the situation under control.

“If I were worried, I wouldn’t come here to buy meat. I believe it has been quarantined,” said the man, who gave his surname as Zhang.

In many other countries the first wave has not yet peaked. Infection rates are growing alarmingly in countries such as India and Brazil, which has overtaken the UK to become the country with the second-highest Covid-19 death toll in the world.

Authorities in In Sao Paulo announced plans to dig up cemeteries to clear spaces for new victims of the pandemic, with exhumed bodies being put into bags and stored in large metal containers. The municipal funeral service has bought 12 containers which will be delivered to burial grounds around the city over the next two weeks.

France reported on Saturday, 24 new coronavirus deaths over the previous 24 hours, taking the total to 29,398 and marking the fourth day with under 30 fatalities.

The government also reported the number of people in hospital fell by 215 to 10,909 and those in intensive care units fell by eight to 871, with both tallies continuing weeks-long downtrends.

India reported its biggest single-day jump in cases on Saturday, taking its total to more than 300,000. Despite escalating cases and reports of people being turned away from hospitals, the government is continuing to loosen lockdown measures across the country.

In Sudan, a spike in unexplained deaths in refugee camps in the western Darfur region has sparked concerns about an invisible spread of the coronavirus.

Hospitals in the region have reported an influx of patients with coronavirus symptoms including fever, breathing difficulties and lost sense of taste and smell, according to the Associated Press. Only 54 deaths have been officially confirmed in Darfur out of 193 cases, but doctors fear the true figures are far higher.

“We’re losing a whole generation,” said Gamal Abdulkarim Abdullah, the director of Zam Zam camp. He had documented 70 deaths in the past week, he said.

In the United States, Dr Anthony Fauci, a senior infectious disease official, has said the country may be reopening too fast, as hospital admissions rise in states including Texas and North Carolina. Both have reported their highest figures since the pandemic began.

“When you start seeing more hospitalisations, that’s a sure-fire sign that you’re in a situation where you’re going in the wrong direction. Maybe we need to slow down a little” on relaxing lockdown measures, he told CNN.

He said people attending Trump election rallies, scheduled to resume next week with a gathering in Oklahoma, risked acquiring or spreading the disease. He said he had not spoken to Mr Trump about the rallies but urged attendees to wear a mask at all times.

In another interview with Yahoo he warned of risks at Black Lives Matter protests. “You’re having crowds, and we recommend not to go in crowds. Physical distancing is impossible,” Mr Fauci said. “When people get animated, they get involved in the demonstration, they start chanting and shouting and screaming, very often they take their mask off.”

A pastor in Argentina turned his church into a bar in protest at the uneven easing of restrictions in Santa Fe province. Church leaders were dressed as waiters carrying Bibles on their trays in a mock service. Pastor Daniel Cattaneo said: “So, apart from the breaded veal headed for table four, here goes the word of God.”

New Zealand has gone for 22 days without recording a new case. Following the recovery of an Auckland woman on Monday, it has no known active cases of Covid-19 and no one is in hospital with the virus.

Police in Nepal have arrested 10 people at protests in Kathmandu, including seven foreigners it accused of “interfering in internal affairs”, as demonstrations against the government’s handling of the coronavirus crisis continued.

The country imposed a complete lockdown in March after reporting its second confirmed case. The number of infections has since increased to 5,062, with 16 deaths, and the government has come under fire for not doing enough to contain the outbreak.

The Dalai Lama has said his thoughts are with those suffering in the coronavirus pandemic and he implored humankind to develop “a sense of oneness”.

The 84-year-old leader of Tibetan Buddhism told the BBC that despite widespread fears over coronavirus, climate change and other social and environmental issues, there is much to inspire and celebrate. - Agenices