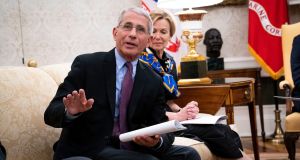 Dr Anthony Fauci: “Where is it going to end? We’re still at the beginning of it.” Photograph: Doug Mills/The New York Times

The US’s top infectious disease expert Dr Anthony Fauci warned on Tuesday that the coronavirus pandemic was far from over, calling Covid-19 his “worst nightmare”.

“In a period of four months, it has devastated the whole world,” Dr Fauci said, speaking to executives at a conference of the Biotechnology Innovation Organization. “And it isn’t over yet.”

About 7 million people have been infected with the coronavirus and 400,000 people are known to have died. Many countries, including the US where more than 110,000 have died, are now relaxing quarantine rules despite rising rates of infection in some areas.

“That’s millions and millions of infections worldwide. And it isn’t over yet. And it’s condensed in a very, very small time frame,” said Dr Fauci.

In a videotaped discussion Dr Fauci said he had known that an outbreak like this could occur but he was surprised by how “rapidly it just took over the planet”. Dr Fauci attributed the rapid spread to the contagiousness of the virus and extensive world travel by infected people.

“I mean, Ebola was scary. But Ebola would never be easily transmitted in a global way,” he said. “HIV, as important as it is, was drawn out over an extended period of time. I mean, I think the ultimate impact of Aids almost certainly will be greater than anything we’re talking about now.”

The coronavirus just “took over the planet,” he said.

Dr Fauci described research on the disease as “a work in progress” and said there were still questions about whether or not survivors who were seriously ill would fully recover. The disease has been shown to have a wide range of effects on people – leaving some without symptoms while others suffer lung damage, strokes, clotting disorders and severe immune responses.

Dr Fauci was speaking after the World Health Organization (WHO) rolled back guidance that it was “very rare” for the disease to be transmitted by people who have the virus but no symptoms.

“Oh my goodness,” Dr Fauci said. “Where is it going to end? We’re still at the beginning of it.”

“The industry is not stupid. They figured it out,” Dr Fauci said. “There’s going to be more than one winner in the vaccine field because we’re going to need vaccines for the entire world. Billions and billions of doses.” – Guardian