London mayor orders review of all statues for slavery links 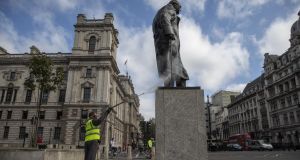 A worker cleans the Churchill statue in London’s Parliament Square, which had been spray-painted with the words “was a racist”. Photograph: Dan Kitwood/Getty Images

All statues in London will be examined with a view to removing those with links to slavery and plantation owners, mayor Sadiq Khan has said.

The London mayor said the city’s landmarks – including street names, the names of public buildings and plaques – will be reviewed by a commission to ensure they reflect the capital’s diversity after Black Lives Matter protesters tore down a statue of slave trader Edward Colston in Bristol.

Speaking to broadcasters on Tuesday, Mr Khan said he did not condone breaking the law and wanted there to be a proper process for the removal of any statues that do not reflect London’s values.

He would not name which ones should come down, saying it would be a matter for the new commission, but said there were clearly statues commemorating slavers in the capital.

His new Commission for Diversity in the Public Realm will also consider which legacies should be celebrated before making recommendations about new statues and which could be removed.

“It is an uncomfortable truth that our nation and city owes a large part of its wealth to its role in the slave trade and while this is reflected in our public realm, the contribution of many of our communities to life in our capital has been wilfully ignored. This cannot continue . . .

“The Black Lives Matter protests have rightly brought this to the public’s attention, but it’s important that we take the right steps to work together to bring change and ensure that we can all be proud of our public landscape.”

Pressed on Sky News about where to draw the line, given Winston Churchill held some racist views, Mr Khan said the cases of Churchill, Gandhi and Malcolm X showed that many great historical figures were not perfect and history should be taught “warts and all”. But there were clear-cut figures such as those actively involved in the slave trade and ownership who should not be celebrated, the mayor said.

Mr Khan announced the commission as he attempted to defuse tensions in London ahead of more planned anti-racism demonstrations. The London mayor is also pressing the Metropolitan police, the UK’s largest force, over the use of stop and search, stun guns and other practices amid concerns about the spread of coronavirus in crowds, and fears of violence as it emerged that far-right groups were planning counter-demonstrations.

The global Black Lives Matter protests were sparked by the death in the US of George Floyd at the hands of a police officer who held him with a knee on his neck for nine minutes while he protested: “I can’t breathe.”

The UK government has come under fire for its claim that the spreading protests are related to the US rather than prejudice in the UK and denials that Britain is a racist country.

Boris Johnson said on Monday that Mr Floyd’s death had awakened an “incontrovertible, undeniable feeling of injustice” worldwide. He had previously condemned the “thuggery” by a minority that marred some demonstrations but acknowledged many of the activists’ concerns were “founded on a cold reality”.

However, the prime minister said those who harmed police or property would face “the full force of the law”.

Keir Starmer, the Labour leader, has said it was “completely wrong” for protesters to pull down the statue of Colston and dump it in the harbour in Bristol – putting him at odds with some MPs on the left of his party – while emphasising the monument should never have been there in the first place.

After police stood by and watched the statue being toppled in Bristol, the focus will shift on Tuesday to Oxford, where hundreds of students and residents are expected to attend a protest calling for the removal of Oxford University’s statue of the colonialist Cecil Rhodes.

A symbolic and socially distanced commemoration is planned at the Nelson Mandela statue in Parliament Square in London at 5pm, organised by Stand Up To Racism. – Guardian