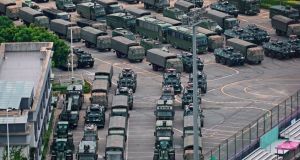 Armored vehicles belonging to China’s paramilitary People’s Armed Police were parked in the sports complex across the border in Hong Kong, in what some have interpreted as a threat against pro-democracy protesters. Photograph: AP Photo/Dake Kang

Hong Kong braced for more mass protests over the weekend, even as China warned it could use its power to quell demonstrations and US president Donald Trump urged his Chinese counterpart, Xi Jinping, to meet with the protesters to defuse weeks of tensions.

Hundreds of China’s People’s Armed Police (PAP) on Thursday conducted exercises at a sports stadium in Shenzhen that borders Hong Kong a day after the US state department said it was “deeply concerned” about the movements, which have prompted worries that the troops could be used to break up protests.

Mr Trump told reporters on Thursday he did not want to see a resort to violence to quell the protests in Hong Kong and reiterated that he wanted to see China “humanely solve the problem.”

“I am concerned. I wouldn’t want to see a violent crackdown,” Mr Trump said, speaking in Morristown, New Jersey. “If he (Mr Xi) sat down with the protesters - a group of representative protesters - I’d bet he’d work it out in 15 minutes ... I know it’s not the kind of thing he does, but I think it wouldn’t be a bad idea.”

Mr Trump said he had a call with Mr Xi scheduled “soon.”

Ten weeks of confrontations between police and protesters have plunged Hong Kong into its worst crisis since it reverted from British to Chinese rule in 1997, and have presented the biggest popular challenge to Mr Xi in his seven years in power.

The Civil Human Rights Front, which organised million-strong marches in June, has scheduled another protest for Sunday.

China’s ambassador to London warned that Beijing could use its power to quell the Hong Kong protests if the situation deteriorated further and repeating charges that some protesters had shown “signs of terrorism.”

“The central government will not sit on its hands and watch,” the ambassador, Liu Xiaoming, told reporters. “We have enough solutions and enough power within the limits of (the) Basic Law to quell any unrest swiftly,” Mr Liu said, referring to Hong Kong’s mini-constitution, which states that the Hong Kong government can ask the Chinese garrison in the city to help maintain order.

The Friday edition of China’s state-controlled Global Times tabloid also warned that China had the option to “forcefully intervene” and lashed out at what Beijing describes as US interference in Hong Kong.

“If Hong Kong cannot restore the rule of law on its own and the riots intensify, it’s imperative then for the central government to take direct actions based on the Basic Law,” it said, saying the Shenzhen PAP deployment was “a clear warning.”

The paper said the situation in Hong Kong “won’t be a repeat of the June 4th political incident in 1989,” referring to the bloody military crackdown on pro-democracy demonstrations in Beijing’s Tiananmen Square 30 years ago.

White House national security adviser John Bolton warned against a repeat of Tiananmen in an interview on Wednesday.

On Wednesday, Mr Trump tied a US trade deal with China to a humane resolution of the protests.

Mr Trump has been seeking a major deal to correct trade imbalances with China ahead of his 2020 re-election bid and has faced criticism from Congress and elsewhere for not taking a stronger public line on Hong Kong and for his characterization of the protests earlier this month as “riots” that were a matter for China to deal with.

Mr Trump’s tougher stance on Hong Kong followed a debate within his administration over whether Washington was looking too compliant while China appeared to be preparing for a crackdown, a source familiar with the deliberations said.

On Thursday, China’s foreign ministry said Beijing had noted Mr Trump’s comment that Beijing needed to resolve the Hong Kong crisis on its own.

Western governments have stepped up calls for restraint following chaotic scenes at Hong Kong’s airport this week that forced cancellation of nearly 1,000 flights and saw protesters set upon two men they suspected of being government sympathisers.

France called on city officials to renew talks with activists, while Canada said China should handle the protests with tact.

Two opposition lawmakers from Hong Kong visiting the United States on Thursday urged the outside world to stay focused on developments.

“For the international community to speak up for Hong Kong is extremely important, and we see that across the American political establishment,” Dennis Kwok of the liberal-democratic Civic Party said at the Asia Society thinktank in New York. He and fellow party member Alvin Yeung were to meet with US lawmakers.

The airport, one of the world’s busiest, was returning to normal on Thursday but under tight security after thousands of protesters jammed its halls on Monday and Tuesday nights.

Late on Wednesday night, police and protesters faced off again on the streets, with riot officers quickly firing tear gas.

Seventeen people were arrested on Wednesday, bringing the total detained since June to 748, police told a news conference, adding that police stations have been surrounded and attacked 76 times during the crisis.

Despite the Shenzhen deployments, several Western and Asian diplomats in Hong Kong said they believed China had little appetite for putting its forces onto Hong Kong’s streets, and a US official said on Wednesday the PAP activities appeared aimed at intimidating the protesters.

The US state department warned on Wednesday that continued erosion of Hong Kong’s autonomy put at risk the preferential economic status it enjoys under US law and leading members of the US Congress have warned that a crackdown could be met by US sanctions.

Research firm Capital Economics said the protests could push Hong Kong into a recession and risked “an even worse outcome if a further escalation triggers capital flight.” Hong Kong’s property market, one of the world’s most expensive, would be hit hard in that scenario, it added.

Financial secretary Paul Chan unveiled a series of measures worth HK$19.1 billion ($2.44 billion) on Thursday to tackle economic headwinds, but he said it was not related to political pressure from the protests.