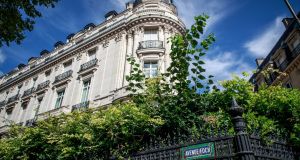 The walls of Jeffrey Epstein’s apartment on Foch Avenue in Paris were covered with photographs of naked young women, according to a worker. Photograph: Christophe Petit Tesson/EPA

The Paris prosecutor’s office is co-operating with US authorities in their investigation of accused sexual predator Jeffrey Epstein, who died in an apparent suicide in a New York prison on August 10th.

Epstein was a regular visitor to France at least since 2002, when he purchased a 2,300sq m apartment on the Avenue Foch. His private jets, registered N120JE and N212JE, landed at Le Bourget airport 11 times in the last 18 months of his life.

Epstein was returning from a three-week stay in Paris when he was arrested at New Jersey’s Teterboro airport on July 6th.

The financier behaved in Paris as he did in Manhattan, Palm Beach and on his private Caribbean island. The walls of his Paris apartment were covered with photographs of naked young women, according to a worker cited in 2,024 pages of US court documents released on August 9th.

A former assistant to Epstein told Libération newspaper there were often several young women in the Avenue Foch apartment, fewer than in Palm Beach, where “there were eight or 10 at a time”.

Epstein’s contacts book was published by the US website Gawker in 2015. It contained a section titled Paris Massage, with dozens of women’s first names and mobile phone numbers.

A group called Innocence en Danger says it has evidence that “several victims of the prostitution network created by Epstein and his accomplices are of French nationality”.

Two French citizens figure in the US court documents as the main procurers of young women for Epstein. They are Ghislaine Maxwell and modelling agency executive Jean-Luc Brunel.

Maxwell is the daughter of the disgraced media tycoon Robert Maxwell and his French wife, Elizabeth.

Epstein’s chief accuser, Virginia Roberts Giuffre, claims Maxwell, who was Epstein’s former girlfriend, recruited her to be Epstein’s sex slave when she was a 16-year-old working at Donald Trump’s Mar-a-Lago estate. Maxwell sued Giuffre for defamation. They settled out of court in 2017.

Giuffre claims Maxwell and Epstein “gave” her to Brunel, as well as “politicians, university professors and people from royal families”.

Brunel has been implicated in previous scandals. He headed two modelling agencies, Karin and MC2, in which Epstein invested $1 million. Two women quoted in the US court documents say Epstein used Brunel to recruit girls as young as 12, for himself and “especially for Jeffrey Epstein”.

Maritza Vasquez, who was Epstein’s accountant, testified that he gave Brunel the use of apartments on East 66th Street in Manhattan to house models. Brunel flew often on Epstein’s planes, and made himself at home in Epstein’s Palm Beach mansion.

In a 1989 episode of the US programme 60 Minutes, two Paris models accused Brunel of having drugged and raped them. An investigation by the programme alleged that Brunel and a fellow agent sexually assaulted nearly two dozen models. Brunel denied the claims.

Libération and the investigative website Mediapart interviewed former models Zoë Brock, from New Zealand, and Thysia Huisman, from the Netherlands. They met Brunel in 1991, when Brock was 17 and Huisman had just turned 18.

On arriving in Paris, Brock was lodged in Brunel’s apartment in the Avenue Hoche, allegedly for her own safety. Brunel returned from a trip abroad and told her she would have to sleep with him, she says. She says that she managed to avoid him but that he spread the rumour she was a drug addict and her work dried up.

In the aftermath of Epstein’s death, US and French media have gone to great lengths to contact Maxwell, now aged 57, and Brunel, in his 70s. Both have gone to ground, and no one is sure of their whereabouts.