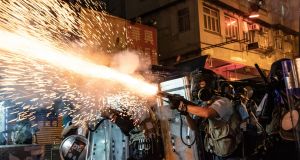 Prominent US lawmakers from both parties are voicing their support for pro-democracy protesters in Hong Kong, and some have called for President Donald Trump to take a firmer stance on the territory’s worst political crisis in more than 20 years.

Mr Trump, who has deployed harsh rhetoric towards China in the past, has so far trod carefully around the issue despite fellow Republicans having expressed support for peaceful protesters.

On Wednesday he took the opportunity to link the protests in Hong Kong directly to the trade battle with China, and offered advice to his Chinese counterpart Xi Jinping in the process.

“Of course China wants to make a [trade] deal. Let them work humanely with Hong Kong first!” he tweeted.

“I know President Xi of China very well. He is a great leader who very much has the respect of his people. He is also a good man in a ‘tough business’. I have ZERO doubt that if President Xi wants to quickly and humanely solve the Hong Kong problem, he can do it. Personal meeting?”

This was an advance on his remarks the previous day, when he described “the Hong Kong thing” as a “very tough situation”. Wilbur Ross, his commerce secretary, earlier on Wednesday described the Hong Kong upheaval in a CNBC interview as an “internal matter”.

Complicating the issue is the fact that the two countries are gearing up for a new round of discussions set to take place in the coming weeks.

In July, Mr Trump told Chinese president Xi Jinping at the G20 that the US would tone down criticism of Beijing’s approach to Hong Kong, according to several people familiar with the matter.

Following that meeting, the state department told Kurt Tong, the departing consul general in Hong Kong, to remove several critical comments about China from his final speech in the Asian financial hub.

Nancy Pelosi, the Democratic speaker of the House, said the situation in Hong Kong was “extremely alarming” and urged Mr Trump to “work to advance peace”.

“If America does not speak out for human rights in China because of commercial interests, we lose all moral authority to speak out elsewhere,” Ms Pelosi said.

Bob Menendez, the top Democrat on the Senate foreign relations committee, accused the president of not respecting “America’s role as a bulwark against forces seeking to undermine stability and liberty”.

Senator Lindsey Graham, a Republican from South Carolina, said the situation was “becoming a defining moment for US-China relations”.

Jim Risch, the Republican chairman of the Senate foreign relations committee, called on the Hong Kong government to prevent violence escalating, while China hawk Marco Rubio of Florida said Beijing’s behaviour was a “cautionary lesson for anyone thinking about any deal with them”.

The top Democrat and Republican on the House foreign affairs committee, Eliot Engel and Michael McCaul, issued a joint statement expressing concern that China would “consider again brutally putting down peaceful protests” 30 years after the brutal crackdown in Tiananmen Square.

“We urge China to avoid making such a mistake, which would be met with universal condemnation and swift consequences,” the lawmakers said. They added: “No foreign powers are fomenting this dissent. It is the result of Beijing’s successive violations of their commitment to honour the will of the people of Hong Kong.”

Hong Kong has been ruled under a “one country, two systems” formula since the UK handover of the territory to China in 1997.

The protests, now in their third month, were triggered by extradition legislation that would allow suspects to be sent to mainland China for trial. Although the bill has since been suspended, protesters have expanded their demands to include democratic reforms that are unpalatable to Beijing.

On Tuesday, Mike Pompeo, the US secretary of state, made an unscheduled trip to New York to meet Chinese diplomat Yang Jiechi. The state department said the pair “had an extended exchange of views on US-China relations”, but declined to provide any further details.

The state department said on Wednesday that it was “deeply concerned” by reports of Chinese paramilitary movement along the Hong Kong border and issued a travel advisory urging citizens to exercise caution because of “civil unrest”.

“The United States strongly urges Beijing to adhere to its commitments in the Sino-British joint declaration to allow Hong Kong to exercise a high degree of autonomy,” the state department said.

“It is important for the Hong Kong government to respect the freedoms of speech and peaceful assembly, as enshrined in the Sino-British joint declaration, and for China to respect Hong Kong’s high degree of autonomy,” it added.

“We condemn violence and urge all sides to exercise restraint, but remain staunch in our support for freedom of expression and freedom of peaceful assembly in Hong Kong.” – Copyright The Financial Times Limited 2019