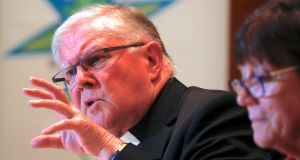 The Catholic Church in Australia on Friday rejected laws forcing priests to report child abuse when they learn about it in the confessional, setting the stage for a showdown between the country’s biggest religion and the government.

The Australian Catholic Bishops Conference (ACBC), the country’s top Catholic body, said it did not accept a recommendation from an official inquiry into church abuse which would force priests by law to report abuse to the police when they hear about it in confession.

One state and a territory in Australia have since introduced laws making it a crime for priests to fail to report abuse heard in the confessional, while the other five states and remaining territory have said they are considering their response.

“The Council ... continues to support retention of the civil law protection for the seal of the confessional,” the ACBC said in a report published on Friday.

“Children will be less rather than more safe if mandatory reporting of confessions were required,” the report added.

Addressing reporters, ACBC president Mark Coleridge said the seal of confession was “a non-negotiable element of our religious life and embodies an understanding of the believer and God”.

Last year, Australia completed a five-year government-appointed inquiry into child sex abuse in churches and other institutions, amid allegations worldwide that churches had protected paedophile priests by moving them from parish to parish.

The inquiry heard that seven per cent of Catholic priests working in Australia between 1950 and 2010 had been accused of child sex crimes and that nearly 1,100 people had filed child sexual assault claims against the Anglican Church over 35 years.

The ACBC published its report two weeks after a former Australian archbishop became the most senior Catholic cleric in the world to be convicted of concealing abuse, and was ordered to serve a one-year prison sentence at home.

The convicted former archbishop of Adelaide, Philip Wilson, himself a former ACBC president, was found to have failed to report child abuse outside the confessional. He has said he will appeal the conviction.

Accusations of covering up abuse in the Catholic church have reverberated all the way to Pope Francis, who has been accused by a United States archbishop of knowing for years about sexual misconduct by an American cardinal and doing nothing about it.–Reuters