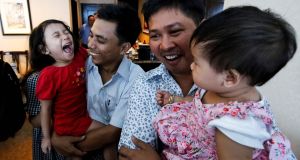 Reuters journalists Wa Lone and Kyaw Soe Oo celebrate with their children after being freed freed from Insein prison after a presidential amnesty in Yangon on May 7th. Photograph: Ann Wang/AFP/Getty Images 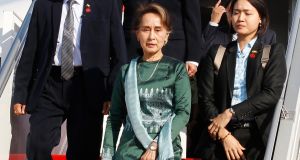 Aung San Suu Kyi: Among those who pushed her to free the reporters was a US statesman and former UN ambassador. When Bill Richardson raised the issue with her last year, he said, she “exploded”. Photograph: Mak Remissa/EPA

The biggest obstacle to releasing two imprisoned Reuters reporters in Myanmar last week was not the country’s military, diplomats and others say, but its de facto civilian leader: Aung San Suu Kyi, a Nobel laureate and former political prisoner.

Her seemingly incongruous opposition to freeing the two reporters, Wa Lone and Kyaw Soe Oo, who were let go last week after more than a year in detention, was well known among the diplomatic emissaries who repeatedly had urged her to release them. At times, she became angry when foreigners raised the case of the two men, who were imprisoned in connection with their coverage of the country’s crackdown on the Rohingya minority.

In an interview on Japanese television, the leader of the National League for Democracy and the country’s state counsellor declared that they broke the law even before a court had delivered a verdict. After their conviction, she insisted that their legal appeals must be completed before she would intervene, despite clear evidence that police entrapped them.

Suu Kyi defied a relentless if quiet campaign by the Reuters news service, the US government and other western nations to free the pair. But the international pressure appeared to have an effect in recent weeks, at least among Suu Kyi’s top aides.

In late April, after Myanmar’s supreme court upheld the reporters’ conviction, her spokesman, Zaw Htay, quietly advised an intermediary that their families should stop filing legal appeals, clearing the way for a presidential pardon, according to three people in the chain of communications.

After the families received his back-channel message, they dropped plans for further appeals and quickly drafted a new pardon request, said Pan Ei Mon, Wa Lone’s wife. Zaw Htay declined to comment on his role in communicating with the families or on Suu Kyi’s opposition to the reporters’ release until now.

The release of the Reuters journalists is a rare concession by the Myanmar authorities in the face of intense global pressure, but it is unlikely to shift attention away from the hundreds of people still imprisoned or facing charges for speaking out.

The two journalists were arrested in December 2017 after they had uncovered a mass grave in Rakhine state, where the military is accused by the United Nations of committing genocide against Rohingya Muslims, killing and raping thousands and forcing more than 700,000 to flee the country.

The two reporters, who were awarded the Pulitzer Prize while they were behind bars, left prison last Tuesday after more than 16 months, ending a case that had brought global condemnation of Suu Kyi and disrepute to her country. The civilian leader has been conspicuously silent about their release.

“Because of her stubbornness and her state of denial over the abuses in Rakhine and the international criticism she received, she became the main obstacle in resolving the case,” said David S Mathieson, an independent analyst of Myanmar’s politics. “It became a very personal case for her, publicly and privately.”

As the reporters remained in prison, they became a symbol of the government’s attempts to suppress free speech and to minimise or deny the atrocities in Rakhine. Suu Kyi and her party, the National League for Democracy, share power with the military in a contentious arrangement enshrined in the military-drafted constitution of 2008.

The daughter of the country’s founding general, Suu Kyi was awarded the Nobel Peace Prize in 1991 while under house arrest and became a symbol of resistance to tyranny. Many of her supporters expected her to expand protections for human rights and free expression after her party swept parliamentary elections in 2015.

Instead, crackdowns on free speech have persisted during her tenure, and hundreds of people are now in prison or face charges for speaking out.

Wa Lone and Kyaw Soe Oo, who had been investigating the massacre of 10 villagers in Rakhine state, were arrested as they left a meeting with the police. One officer handed them rolled up papers, which were later said to contain state secrets.

At trial, a police captain testified that the two had been entrapped. He was later convicted of having violated the police disciplinary code and was sentenced to a year in prison. Other prosecution witnesses gave conflicting accounts of the arrest and contradicted the police claim that information in the papers was secret.

Nevertheless, the court found the pair guilty in September of having violated the colonial-era Official Secrets Act and sentenced them to seven years in prison. Within Myanmar, the prevailing view was that the two men were guilty and traitorous for having exposed the massacre, complicating any possible pardon. But the barrage of international criticism and quiet pressure from diplomats and others seeking their release prompted members of Suu Kyi’s government to seek a solution.

The simplest answer, it seemed, was for the government to free them as part of an annual general amnesty, in which thousands of prisoners are released in mid-April. But time was running short. The supreme court released its decision upholding the pair’s conviction on April 23rd. Barely a week later, the office of the president, Win Myint, had the families’ new pardon petition in hand.

With the legal process complete, they were pardoned in time for a third and final wave of prisoner amnesties last Tuesday.

Among those who pushed Suu Kyi to free the reporters was Bill Richardson, an American statesman and former UN ambassador. When he raised the issue with her early last year, she “exploded”, he said. “Her face was quivering, and if she had been a little closer to me, she might have hit me, she was so furious,” he recounted.

Richardson, who had long considered Suu Kyi a friend, resigned from a Myanmar advisory board on the Rohingya crisis because, he said, it was being used as “a cheerleading squad for the government”.

Another source of pressure on Suu Kyi came from the Trump administration, which some free-press advocates considered a surprise because of its attacks on the news media. Vice-president Mike Pence took the lead in seeking the Reuters reporters’ freedom.

In November, Pence confronted Suu Kyi about the case at a regional forum in Singapore. Suu Kyi responded that the legal appeals process would have to conclude before any chance of presidential pardons.

During the trial, the US ambassador to Myanmar, Scot Marciel, attended court hearings along with diplomats from other nations. Administration officials said that after the conviction, people around Suu Kyi sought to push her toward a position of leniency.

Last Tuesday, Pence, speaking at a conference on Latin American issues at the state department, opened his speech by praising the release of the reporters and saying he hoped it “signals a positive and permanent respect for a free and independent press”.

As part of the strategy to free the reporters, their supporters in Myanmar organised a 28-member legal team that included a retired judge, a former member of parliament and legal experts from a wide range of nongovernmental organisations. In December, the team issued a statement calling the conviction flawed and an obvious case of entrapment.

Thar Lon Zaung Htet, founder of the Protection Committee for Myanmar Journalists and a secretary of the Myanmar Press Council, helped the families communicate with top officials over the months, including Suu Kyi, and with arguably the country’s most powerful figure, Senior Gen Min Aung Hlaing,

“When I met Commander in Chief Min Aung Hlaing, I asked him to help in the Reuters reporters’ case,” Thar Lon Zaung Htet said. “He replied to me that he would help if he could. When I asked Daw Aung San Suu Kyi, she did not answer.” – New York Times