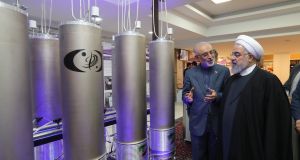 Germany, Britain and France have triggered a dispute resolution mechanism in the 2015 Iran nuclear deal in response to Tehran’s decision to lift the restrictions on nuclear enrichment imposed by the agreement.

The three European signatories – known as the E3 – to the Joint Comprehensive Plan of Action (JCPOA) said their aim was not to walk away from the deal but to save it.

“The E3 remain fully committed to this diplomatic effort and intend to resume it as soon as conditions allow. However, in the meantime Iran has continued to break key restrictions set out in the JCPOA. Iran’s actions are inconsistent with the provisions of the nuclear agreement and have increasingly severe and non-reversible proliferation implications,” the countries’ foreign ministers said in a joint statement.

“We do this in good faith with the overarching objective of preserving the JCPOA and in the sincere hope of finding a way forward to resolve the impasse through constructive diplomatic dialogue. In doing so, our three countries are not joining a campaign to implement maximum pressure against Iran.”

The JCPOA was agreed in July 2015 between Iran and the five permanent members of the United Nations Security Council (the United States, China, Russia, Britain and France) along with Germany and the European Union.

The US withdrew from the accord in 2018 and imposed a policy of “maximum pressure”, including extraterritorial sanctions that have crippled Iran’s economy. In response to the US action, Iran has gradually lifted many of the restrictions the JCPOA imposes on its nuclear programme.

US president Donald Trump last week called on Germany, Britain and France to follow Washington in abandoning the JCPOA. But British prime minister Boris Johnson said if the deal was to be rejected because of its perceived flaws, it should be replaced with another agreement to prevent Iran from pursuing its nuclear enrichment programme.

“President Trump is a great dealmaker, by his own account. Let’s work together to replace the JCPOA and get the Trump deal instead.”

Foreign secretary Dominic Raab stressed that Britain, France and Germany had, unlike the US, fulfilled their part of the deal by lifting sanctions against Iran after it agreed to halt its nuclear enrichment programme and allow inspections under the deal.

“For our part, as the United Kingdom, we were disappointed that the US withdrew from the JCPOA in May 2018. And we have worked tirelessly with our international partners to preserve the agreement. We have upheld our commitments, lifting economic and financial sanctions on sectors such as banking, oil, shipping and metals. We lifted an asset freeze and travel bans on listed entities and individuals. We have sought to support a legitimate trade relationship with Iran,” he said.

Iranian foreign minister Mohammad Javad Zarif accused the three European countries of bowing to US pressure and putting the deal in danger.

“For 20 months, the E3 – following UK appeasement policy – has bowed to US diktat. That hasn’t gotten it anywhere – and it never will,” he said on Twitter.

“E3 can save JCPOA but not by appeasing the bully & pressuring the complying party. Rather it should muster the courage to fulfil its own obligations.”