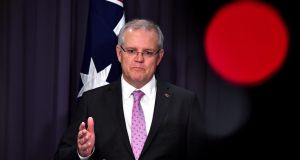 Australian prime minister Scott Morrison, whose government faces a crucial by-election that could weaken its grip on power, said on Tuesday Canberra was open to recognising Jerusalem as Israel’s capital and shifting its embassy there.

Such a move, which would follow US president Donald Trump’s controversial decision in December to do just that, would reverse decades of foreign policy and inflame tension with some of Australia’s Asian neighbours.

Indonesia, the world’s largest Muslim-majority nation, and Australia are due to sign a trade deal this year.

Indonesia’s trade minister, Enggartiasto Lukita, denied Australian media reports on Tuesday that Jakarta was considering putting the pact on hold over the possibility of Canberra changing its stance on Israel.

Mr Morrison’s openness to recognising Jerusalem and moving Australia’s embassy there comes four days before a by-election in Sydney where his centre-right coalition faces the risk of losing its tenuous hold on power.

The by-election is in the Sydney harbourside seat of Wentworth vacated by former prime minister Malcolm Turnbull, who was ousted in a party-room coup by members of Mr Morrison’s Liberal party, the senior partner in a Liberal-National coalition, in August.

Census figures show 12.5 per cent of people in Wentworth are Jewish, a significantly larger proportion than the rest of the country. The Liberal candidate contesting the by-election on Saturday is Dave Sharma, a former Australian ambassador to Israel who has floated the idea in the past.

Mr Morrison will have to negotiate with independent lawmakers in order to continue governing in minority if the coalition loses Saturday’s by-election.

The Sydney Morning Herald newspaper described Mr Morrison’s apparent change of heart as “unprincipled and craven” and he faced a torrid question time in parliament.

“The orthodoxy that’s driven this debate which says issues like considering the question of the capital are taboo. I think we have to challenge that,” Mr Morrison said earlier in Canberra.

“No decision has been made regarding the recognition of a capital or the movement of an embassy ... but at the same time, what we are simply doing is being open to that suggestion,” Mr Morrison said.

The status of Jerusalem is one of the thorniest obstacles to a peace deal between Israel and the Palestinians. Israel regards all of the city, including the eastern sector that it annexed after the 1967 Middle East war, as its capital.

Australia refused to follow Mr Trump’s decision in December, which enraged Palestinians and upset the Arab world and Western allies, and has so far kept its mission in Tel Aviv.

The apparent change of policy was welcomed by Israel but swiftly criticised by Palestinian representatives.

Israel’s prime minister Benjamin Netanyahu, whom Mr Morrison had telephoned to explain his shift, said on Twitter he was “very thankful” Mr Morrison was considering the move.

Palestinians, with broad international backing, want East Jerusalem as the capital of a future state they hope to establish in the occupied West Bank and the Gaza Strip. Peace talks between the parties broke down in 2014.

In a statement, Palestine’s embassy in Australia called Mr Morrison’s announcement “deeply disturbing”. It said short-term political gain “would surely be outweighed by the detriment both to Australia’s international standing and in its relations with Arab and Muslim-majority countries”.

The US embassy became the only foreign embassy in Jerusalem in May, but Mr Netanyahu has attempted to persuade others to follow suit.

“It’s a big change, it is out of step with everyone, except America,” said Mr Tiffen.

“But three days out from the Wentworth by-election, it’s pretty blatant ... to the extent that there is a Jewish vote there, it probably helps.”–Reuters