Across Myanmar, denial of ethnic cleansing and loathing of Rohingya 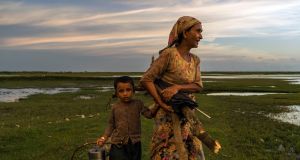 A Rohingya woman and her child return to the Basara camp for internally displaced people in Sittwe, the provincial capital of Rakhine state in Myanmar, on October 1st. Photograph: Adam Dean/The New York Times

The Buddhist abbot tucked his legs under his robes and began to explain. Rohingya Muslims do not belong in Myanmar, and they never have, he said. Their fertility allowed them to overwhelm the local Buddhist population. But now, somehow, many Rohingya seemed to be gone.

“We thank the Lord Buddha for this,” said Thu Min Gala, the 57-year-old abbot of the Damarama Monastery in Sittwe, the capital of Rakhine state in western Myanmar. “They stole our land, our food and our water. We will never accept them back.”

An overwhelming body of published accounts has detailed the Myanmar army’s campaign of killing, rape and arson in Rakhine that has driven more than 600,000 Rohingya out of the country since late August, in what the United Nations says is the fastest displacement of a people since the Rwanda genocide.

But in Myanmar (formerly Burma), and even in Rakhine itself, there is stark denial that any ethnic cleansing is taking place. The divergence between how Myanmar and much of the outside world see the Rohingya is not limited to one segment of local society.

Nor can hatred in Myanmar of the largely stateless Muslim group be dismissed as a fringe attitude. Government officials, opposition politicians, religious leaders and even local human-rights activists have become unified behind this narrative: The Rohingya are not rightful citizens of Buddhist-majority Myanmar, and now, through the power of a globally resurgent Islam, the minority is falsely trying to hijack the world’s sympathy.

Social media postings have amplified the message, claiming that international aid workers are openly siding with the Rohingya. Accordingly, the Myanmar government has blocked aid agencies’ access to Rohingya still trapped in Myanmar – about 120,000 confined to camps in central Rakhine and tens of thousands more in desperate conditions in the north.

The official answer to UN accounts of the military’s mass burning of villages and targeting of civilians has been to insist that the Rohingya have been doing it to themselves. “There is no case of the military killing Muslim civilians,” said Dr Win Myat Aye, the country’s social welfare minister and the governing National League for Democracy party’s point person on Rakhine. “Muslim people killed their own Muslim people.”

When asked in an interview about the evidence against the military, the miniser noted that the Myanmar government had not sent any investigators to Bangladesh to vet the testimony of fleeing Rohingya, but that he would raise the possibility of doing so in a future meeting.

“Thank you for advising us on this idea,” he said.

The Rohingya, who speak a Bengali dialect and tend to look distinct from most of Myanmar’s other ethnic groups, have had roots in Rakhine for generations. Communal tensions between the Rohingya and ethnic Rakhine Buddhists exploded in the second World War, when the Rakhine aligned themselves with the Japanese, while the Rohingya chose the British.

Although many Rohingya were considered citizens when Burma became independent in 1948, the military junta that wrested power in 1962 began stripping them of their rights. After a restrictive citizenship law was introduced in 1982, most Rohingya became stateless.

Even the name Rohingya, which the ethnic group has identified with more vocally in recent years, has been taken from them. The Myanmar government usually refers to the Rohingya as Bengalis, implying they belong in Bangladesh. The public tends to call them an epithet used for all Muslims in Myanmar: kalar.

The nomenclature is so sensitive that in a speech this month, Aung San Suu Kyi, the Nobel Peace Prize laureate and de facto leader of the government, referred only to “those who have crossed over to Bangladesh”.

Some ethnic Rakhine politicians are hailing the Rohingya exodus as a good thing. “All the Bengalis learn in their religious schools is to brutally kill and attack,” said Khin Saw Wai, a Rakhine member of parliament from Rathedaung Township. “It is impossible to live together in the future.”

Buddhist monks, moral arbiters in a pious land, have been at the forefront of a campaign to dehumanise the Rohingya. In popular videos, extremist monks refer to the Rohingya as “snakes” or “worse than dogs”. Outside Thu Min Gala’s monastery in Sittwe, a pair of signs reflected an alternate sense of reality. One said that the monastery, which is sheltering ethnic Rakhine who fled the conflict zone, would not accept any donations from international agencies. The other warned that multifaith groups were not welcome.

The abbot claimed that authorities in Rakhine had stopped a car owned by the International Committee of the Red Cross that was filled with weaponry destined for Rohingya militants who carried out attacks against the security forces in August. Thu Min Gala claimed that sticks of dynamite had been wrapped in paper with the Red Cross logo. The Red Cross denied these accusations.

“We don’t trust the international society,” the abbot said. “They are only on the side of the terrorists.”

At another monastery in Sittwe, an elderly abbot, Baddanta Thaw Ma, halted my conversation with a young monk by slapping the air in front of my face. “Go! Go! Go!” he yelled in English, before switching to the local Rakhine dialect. “Go away, you foreigner! Go away, you kalar lover.”

Public sentiment against Muslims – who are about 4 per cent of Myanmar’s population, encompassing several ethnic groups, including the Rohingya – has spread beyond Rakhine. In 2015 elections, no major political party fielded a Muslim candidate. Today no Muslims serve in the parliament, the first time since the country’s independence.

A couple hours outside Yangon, the country’s largest city, Aye Swe, an administrator for Sin Ma Kaw village, said he was proud to oversee one of Myanmar’s “Muslim-free” villages, which bar Muslims from spending the night, among other restrictions.

“Kalar are not welcome here because they are violent and they multiply like crazy, with so many wives and children,” he said. Aye Swe admitted he had never met a Muslim before, adding, “I have to thank Facebook because it is giving me the true information in Myanmar.”

Social media messaging has driven much of the rage in Myanmar. Though widespread access to mobile phones only started a few years ago, mobile penetration is now about 90 per cent. For many people, Facebook is their only source of news, and they have little experience in sifting fake news from credible reporting.

One widely shared message on Facebook, from a spokesman for Suu Kyi’s office, emphasised that biscuits from the World Food Programme, a UN agency, had been found at a Rohingya militant training camp. The United Nations called the post “irresponsible”.

The Myanmar government, however, insists the public needs to be guided. “We do something that we call educating the people,” said Pe Myint, the nation’s information minister. He acknowledged, “It looks rather like indoctrination, like in an authoritarian or totalitarian state.”

In Yangon, Pe Myint this month gathered local journalists to discuss what he called “fabricated news” by foreign reporters and a “political war” in which international aid groups favoured the Rohingya. Last month, a mob in Sittwe attacked Red Cross workers, who were loading a boat with supplies that locals believed would only go to the Rohingya.

Even among officials who might otherwise champion human rights, frustration has been directed at foreign critics. Quietly, some defend Suu Kyi’s failure to call out the military and protect the Rohingya by saying it would be political suicide in a country where hatred of the Rohingya is so widespread. They see the recent international pressure, at best, as ignorant of domestic complexities and, at worst, as intent on hindering Myanmar’s development.

“We ask the international community to acknowledge that these Muslims are illegal immigrants from Bangladesh and that this crisis is an infringement of our sovereignty,” said Nyan Win, a spokesman for the National League for Democracy, which shares power with Myanmar’s military. “This is the most important thing with the Rakhine issue.”

Ko Ko Gyi, a democracy advocate who was jailed for 17 years by the military when it ruled Myanmar, also evoked national interest. “We have been human-rights defenders for many years and suffered for a long time, but we are standing together on this issue because we need to support our national security,” he said.

“We are a small country that lies between India and China, and the DNA of our ancestors is to try to struggle for our survival,” Ko Ko Gyi said. “If you in the West criticise us too much, then you will push us into the arms of China and Russia. ”

Last month, those two permanent members of the UN Security Council shielded Myanmar from an attempt by other nations to condemn the Myanmar military for its offensive in Rakhine. The humanitarian situation has grown desperate within Rakhine while the official block on aid largely continues. Throughout the state, ethnic Rakhine have been warned by community leaders not to break the blockade.

Last month in Myebon Township, in central Rakhine, women’s activists prevented international aid groups from delivering assistance to an internment camp where thousands of Rohingya have been sequestered since the 2012 sectarian violence, according to foreign staff.

But Tun Tin, a Rakhine trishaw driver, needed the money and delivered food to the Rohingya camp. Shortly after, his wife, Soe Chay, said she was accosted by a crowd that forced her to a nearby monastery. Inside the religious compound, they beat her and sheared her hair. Then the mob marched her through Myebon, wearing a sign calling her a “national traitor”.

Despite his wife’s ordeal, Tun Tin said he did not regret having sent supplies to the camp, where Rohingya say their rations are running low. “They are human,” he said. “They need to eat, just like us.”