Zuma to respond to ANC call for him to stand down 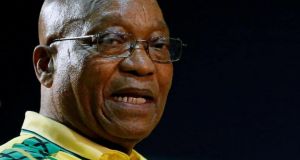 President of South Africa Jacob Zuma: if he refuses to stand down, the matter could go to parliament for a vote on a motion of no confidence. Photograph: Siphiwe Sibeko/Reuters

South African president Jacob Zuma is to respond on Wednesday to the ruling African National Congress party’s decision to recall him from office more than a year before his second term officially ends.

The ANC’s national executive committee (NEC) decided late on Monday evening to sack Mr Zuma, who is accused of widespread corruption, after he refused to voluntarily resign. He was notified in writing of the decision by ANC secretary-general Ace Magashule, a close ally.

Mr Magashule told reporters in Johannesburg on Tuesday that although no specific deadline had been set for Mr Zuma to respond, he expected a swift reply. “I am sure the president will respond tomorrow,” he said.

He went on to say that while the NEC’s decision “was final, and cannot change”, the party remained open to negotiating with Mr Zuma.

Mr Zuma later said he would address the media at 10am (8am Irish time) on Wednesday.

Last week it looked like the exit negotiations between Mr Zuma and the ANC’s newly elected leader, Cyril Ramaphosa, were going well, and it was suggested by some ANC officials that South Africa’s president had agreed in principle to leave office.

However, by the weekend it had become apparent the talks had derailed, with Mr Ramaphosa saying on Sunday that the NEC would decide Mr Zuma’s political future the following day.

On Tuesday Mr Magashule said the negotiations broke down primarily over Mr Zuma’s wish to serve out a notice period in his job of between three and six months.

This was unacceptable to the NEC, said Mr Magashule, who said ANC leaders wanted Mr Ramaphosa to become the country’s new president immediately.

Mr Zuma stood down as ANC president last December, but his term as South Africa’s president does not end until 2019. It is believed the ANC primarily wants to get rid of him early to ensure controversy surrounding him does not negatively affect the party’s standing with voters in the run-up to next year’s general election.

Mr Zuma’s popularity among the electorate is at an all-time low. He is accused of helping the wealthy Gupta business family to illegally win billions of rand in state contracts, and of corruption and bribery linked to a 1999 government arms deal.

When asked what the ANC would do if Mr Zuma refused to resign, Mr Magashule said that as he was deployed to be South Africa’s president by the ANC, Mr Zuma was expected to comply with its orders.

He said the NEC had not discussed tabling a motion of no confidence in parliament against the president, saying the party would decide what to do next once Mr Zuma’s intentions were clear.

Mr Zuma has been under pressure to leave office since Mr Ramaphosa, his deputy, was elected ANC president in December. If he refuses to heed the ANC’s order, South Africa’s president is expected to face a vote of no confidence in parliament before the end of the month.

Alternatively Mr Zuma could be impeached if he is suspected of violating the South African constitution or breaking the law.

If Mr Zuma refuses to stand down and the ANC fails to act quickly against him, opposition parties plan to push for their own motion of no confidence against the president to be tabled in parliament within days.

As Tuesday unfolded the pressure on Mr Zuma to resign from many quarters of South African society also grew dramatically, with a variety of civil society groups and unions calling on him to put the country’s interests before his own.

The Congress of South African Trade Unions, the ANC’s tripartite alliance partner and a once loyal Zuma supporter, said his refusal to stand down was “dividing and humiliating” the former liberation movement.