Dan Kyeyune was shot in the head; Ritah Nabukenya was run over 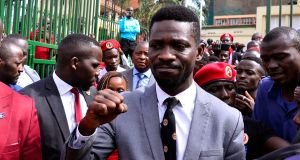 A supporter of Ugandan opposition politician and popular musician Bobi Wine died on Tuesday after being shot in the head, according to witnesses – the second to die this week.

The man, who was named as Dan Kyeyune, was killed in Nansana, northwest of capital city Kampala.

The previous day, another supporter, Ritah Nabukenya, died after reportedly being knocked over by a vehicle in Kampala. Wine and his supporters said a police car ran into her deliberately, after seeing her clothes, which indicated she supported him. In a statement, Kampala police said she had been killed in a motorcycle accident.

Photos of what appeared to be Kyeyune’s bloody body circulated on social media. Wine shared the images, tweeting: “What a country! What a time! This evening as we returned from the burial of Ritah Nabukenya, who was murdered by police yesterday, police and [the] Local Defence Unit shot at the crowd of people who were waving at me. Dan Kyeyune died on [the] spot, others sustained severe injuries. It is totally dark here.”

Others were arrested this week, including journalist Moses Bwayo, who has been working on a long-term documentary project about Wine. In a statement calling for Bwayo’s release, the Foreign Correspondents’ Association of Uganda said “independent journalism is a vital part of a free society and Ugandan authorities must not criminalise journalists reporting on opposition political groups”.

Government and police spokespeople did not respond to requests for comment.

Wine, whose real name is Robert Kyagulanyi, is also known as the “ghetto president” and his movement is called People Power. The 38-year-old’s image can be seen across the country: supporters wear T-shirts with Wine’s face on them; his portrait is stuck onto boda boda motorbikes and matatu taxis. His music is also pervasive and sometimes political, with a 2019 release containing the lyrics “We shall walk with swag in a new Uganda.”

Many of his closest supporters wear distinctive red berets – an item of clothing that was outlawed in September.

Wine is running for president in next year’s election, which will see him go up against Yoweri Museveni, a 75-year-old who has held power since 1986, and been criticised internationally for overseeing growing corruption and failing to open the democratic space.

“Chances are I will be president,” Wine told The Irish Times in August. “We have seen from east to west, from north to south, Ugandans are yearning for change.”

Last week, The Irish Times witnessed police shooting live rounds to disperse opposition supporters in Kampala following the release of poet, academic and feminist Stella Nyanzi, who spent more than a year in prison under charges of cyberbullying Mr Museveni.

This came after she posted a poem on Facebook in which she said she wished the president had suffocated in his mother’s vagina.