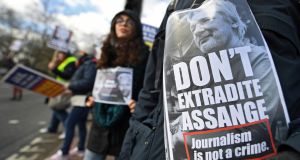 Julian Assange has been likened to the Iraq war whistleblower Katharine Gun and the 19th-century French army officer Alfred Dreyfus at a hearing where the WikiLeaks founder’s lawyers argued his extradition to the US was prohibited.

A central plank of efforts to prevent him from being sent for trial in the US was laid out on the third day of hearings at Woolwich crown court, where a barrister for Mr Assange said the US-UK extradition treaty expressly ruled out extradition for political offences.

Edward Fitzgerald QC said that offences alleged against Mr Assange were “purely political”. Mr Assange faces a charge of conspiracy to commit computer intrusion and 17 charges under the Espionage Act.

He argued that Mr Assange faces the same sort of accusation that the UK brought against Gun, a GCHQ employee who leaked details to the Observer of a secret US campaign to spy on the UN before the Iraq war.

“Had she fled to another country she would have been able to say this is a purely political offence,” said Mr Fitzgerald, who cited Dreyfus, the French military officer of Jewish descent wrongly convicted of spying in 1894 in an atmosphere of anti-Semitism.

“Equally we know that Dreyfus was charged with espionage, providing information to the German armed forces. It turned out to be a totally false and wrong allegation but there is no doubt that had he gone to the UK and had France sought his extradition it would have been a purely political offence even if the allegations had been accepted.”

Prosecutors say Mr Assange’s case is covered only by the Extradition Act 2003, which makes no exception for political offences, but Mr Fitzgerald said: “If it’s not a terrorist case, not a violent offence, then the principle you should not be extradited for a political offence is of virtually universal application. It dates back for more than 100 years.

“The US, of course, writes it into every treaty because they don’t want their citizens being extradited for political offences.”

Earlier, Mr Fitzgerald referred to a range of other cases, such as when the government of Trinidad wanted to execute a number of men without waiting for them to exhaust their rights under an international convention in the Americas.

On that occasion, which resulted in a finding that the condemned men were entitled to appeal to the inter-American court of human rights, Mr Fitzgerald said Trinidad had used the same arguments that the US was now using against Mr Assange.

Tuesday’s hearing opened with a warning from the judge, Vanessa Baraitser, that she had become aware that a photograph had been taken in the courtroom and that the person responsible would be prosecuted if they were identified.

“I will consider this person to be in contempt of this court and I will deal with them accordingly,” the judge said.

Separately, Mr Fitzgerald told the judge Mr Assange was now on medication and may need to take breaks.