Musician turned politician Bobi Wine, real name Robert Kyagulanyi (37), has announced that he will run for president of Uganda in 2021. However, Wine's bid to unseat president Yoweri Museveni after 33 years has been perilous. Video: Sally Hayden 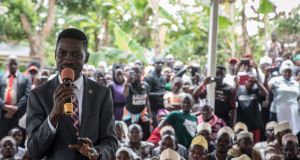 That’s surprising because of the danger he’s in. In slightly more than a year, Wine has been tortured in police custody and his driver shot dead with a bullet Wine says was meant for him; his friends have been arrested and his concerts and meetings shut down. His life is a constant game of cat-and-mouse with the police.

Wine’s home is gated, but once I’m inside he greets me at his door, extending a tattooed arm with a slight smile and a totally unnecessary: “I’m Bobi Wine.”

Wine, a thin 37-year-old whose real name is Robert Kyagulanyi, is leading a potential revolution in Uganda. His slogan is “people power”. His supporters wear trademark red berets.

In 2014, Wine was denied a UK visa after activists protested over homophobic lyrics in one of his songs, which appeared to call for gay men to be attacked

It’s been two years since he entered politics, becoming the MP for his constituency Kyadondo East, on Kampala’s outskirts, after winning a byelection.

In July, Wine announced he will run for president in 2021. He’s feeling confident. “Chances are I will be president,” Wine says. “We have seen from east to west, from north to south, Ugandans are yearning for change.”

The self-proclaimed “ghetto president” is playing with fire. Uganda’s 75-year-old leader, Yoweri Museveni, has been in power for 33 years – longer than most of the country’s population have been alive. While Museveni also originally preached democracy and said he wanted to give citizens control, he has overseen the removal of term limits and the scrapping of a presidential age limit.

“There’s no doubt that I will beat Museveni hands down at the vote,” says Wine. “Where the questions is is whether or not he will accept the voice of the people.”

We’re driving to his first campaign stop of the day, a Muslim funeral in Mpigi, southwest of the capital.

From the car, some of the graffiti ubiquitous across Kampala is visible. “#FreeBobi”, it says, referring to Wine’s arrest last year, when he was locked up and tortured by Ugandan security forces. His treatment drew national and international attention to his campaign, in a way the country’s leadership seemingly hadn’t foreseen.

“Power4People,” another piece of graffiti says.

Wine found massive success as a musician, producing catchy music that has turned increasingly political. Some messaging is subtle. The video for the 2018 song Kyarenga featured two suitors trying to charm a woman.

One was potbellied, thuggish and corrupt, attempting to buy the woman’s father with foreign currency; the other was Wine, a young, charismatic man, who spoke of the purity of his love and eventually won her heart.

More recently, Tuliyambala Engule, released seven months ago, has become an anthem. Its video shows Wine walking through flames, followed by Ugandan women and men dressed as nurses, labourers, and a motorbike driver, representing different sectors of society. “When the struggle is over we shall wear the victor’s crown. We will walk with swag in a new Uganda,” the lyrics go.

I believe there should be very strict observation of a two-term service. Very, very strict

Wine – and his army of volunteers – are adept at social media. They’re widely cited as the reason Uganda’s government brought in a “social media tax” last summer, meaning Ugandans must pay daily to have access.

Wine’s Twitter account – which has more than 350,000 followers – describes him as a “ghetto child who has something to say through music”. He has more than 300,000 Instagram followers, and over one million fans on Facebook. The volunteers who travel with him say live streaming each campaign event protects them from police harassment.

As he stops at two Muslim funerals, and then a Catholic thanksgiving, hundreds of people cheer for Wine, calling his name and thumping their fists in a “people power” salute. Boda boda drivers chase the car, delighted to be anywhere close to the man they’re already calling “president”.

The schedule changes repeatedly, as Wine’s entourage try to outsmart the police they believe are tailing them. Several times, vehicles loaded with security or military men holding guns drive past us, sirens blaring. Wine’s driver tears down the wrong side of the road, or along the pavement, overtaking other cars in a bid to lose unwanted followers.

Monitoring takes other forms too. Recently, the Wall Street Journal reported that the Ugandan government was using Chinese telecoms giant Huawei to spy on Wine. Huawei denies these claims.

“I know I’m under strict surveillance, 24-hour surveillance,” Wine says. “I know [the government] have planted people to follow me at all my gates, but I keep going, I just have to get used to it and it will be normal.”

Wine has not always stood for the underdog. In 2014, he was denied a UK visa after activists protested over homophobic lyrics in one of his songs, which appeared to call for gay men to be attacked.

Homosexuality is still criminalised in Uganda under colonial-era laws. When I ask Wine whether he still holds the same views and if he would work to repeal that legislation, he responds that he would “respect all Ugandans”, though says it’s also a matter for the public to decide.

The past few years have seen a number of African dictators toppled, but this hasn’t always led to civilian rule. The Gambia, where the brutal and eccentric Yahya Jammeh was replaced by the democratically-elected property developer Adama Barrow, is an example of how well things can go, Wine says. In comparison, “Zimbabwe got rid of a dictator only to create another”.

Many Ugandans have compared Wine to Museveni in his early days. Privately, they say there is no way to ensure he won’t repeat the same behaviours and let power go to his head. When I press Wine on this, he says he will make sure institutions to curtail his power are restored, and he will commit to serving a maximum of two terms as president. “I believe there should be very strict observation of a two-term service. Very, very strict.”

Answering the same question again later, his response sounds slightly less rehearsed. “It scares me, honestly, it scares me to think of how patriotic some people sounded, people like Museveni, only to turn against the people,” he says.

“But I also know that even within the struggle we are empowering people to stand up, even against our own selves . . . I strongly believe that leaders must – from time to time – be reminded that people can elevate them and put them down.”

If Museveni was ousted, even democratically, it is unclear what would happen next. Wine says Museveni could be an adviser to his successor. “I want him to be a respectable former president, a resident president who we look at as a person who played his part and made his mistakes, but also has a role in national healing and national reunification.”

However, Wine is also calling for the “rule of law” to be reinstated, along with anything that might entail. “I believe strongly in a truth and reconciliation programme because at the end of the day justice must not only be served, but must be seen to be served.”