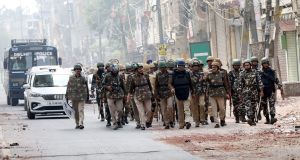 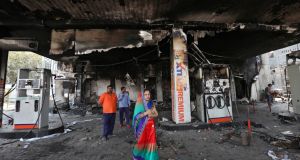 People stand at a damaged fuel station in New Delhi, India after it was set on fire by a mob during clashes between people demonstrating for and against a new citizenship law. Photograph: Rupak De Chowdhuri/Reuters

Shoot-at-sight orders have been issued by India’s federal government to paramilitary and police personnel deployed across parts of the capital New Delhi and a curfew imposed to contain sectarian rioting, in which the official overnight death toll rose to 27 on Wednesday.

Unofficial figures, however, recorded on social media following clashes between Hindus and Muslims for four successive days in in north-east Delhi, put the number of fatalities at anywhere between 40 and 100.

More than 200 people, including children, have also been hospitalised.

Many of the injured were in a serious condition with gunshot wounds sustained in clashes that began at the weekend as a confrontation largely between Muslims opposed to a new controversial citizenship law, and Hindus who supported it.

But by Tuesday the clashes had degenerated into communal violence, with Hindu and Muslim mobs armed with guns, swords, sticks, stones and petrol bombs attacking each other in narrow labyrinthine alleys where the two communities live in close proximity.

The rioting in which numerous shops, homes and vehicles, temples and mosques were burned, overshadowed US president Donald Trump’s two-day visit to Delhi that ended late on Tuesday evening.

An uneasy calm, enforced by thousands of security personnel, prevailed in the city’s riot-torn areas on Wednesday, even as hundreds of Muslim families began fleeing their homes.

“Our children are terrified and do not want to stay here anymore,” said Mohammad Shabir as he abandoned his home in Jafrabad, one of the worst affected areas, where he had lived for decades.

“We do not feel safe and have to find refuge in Muslim-dominated areas where we can be with our own people,” he said.

Many like Shabir, who had lived for long in amity with Hindu neighbours, sought temporary shelter in Sikh gurdwaras or temples where, for now, they were guaranteed safety and food.

The act guarantees Indian citizenship to all minority communities including Buddhists, Christians and Sikhs facing persecution in neighbouring Islamic countries Afghanistan, Bangladesh and Pakistan, but not to Muslims.

A former BJP legislator precipitated the current crisis by threatening the protesters staging the sit-in with eviction once Mr Trump left India on Tuesday. This triggered an immediate riposte from local Muslims, after which the rioting started.

In the ensuing violence video footage on social media showed a mob climbing atop a mosque’s minaret to plant a saffron flag upon it as a symbol of Hindu conquest.

The BJP is known in Indian political circles as the saffron party as its flag is of that colour, and its senior members do not hide their antipathy towards Muslims, who constitute about 20 per cent of India’s population of 1.3 billion.

In the meantime Delhi police who were deployed to contain the violence proved inadequate to the task and in some instances even appeared to be siding with Hindu mobs against Muslims.

Hinting at a wider conspiracy involving senior officials he said that this was a “malaise” with the police across the country; they waited for orders before acting. “Had the police taken action against the instigators the violence would not have occurred,” Justice Joseph said.