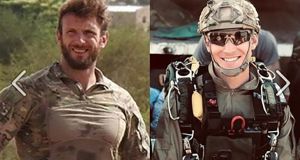 French soldiers Cedric de Pierrepont and Alain Bertoncello who were killed during the rescue of hostages in Burkina Faso. File photograph: Getty

The military added that two of the elite soldiers were killed in the night-time operation. French special forces carried out the raid under cover of dark over the night of Thursday-Friday, supported by US intelligence and troops from France’s Barkhane operation deployed in the Sahel region to counter Islamist militants.

All four hostages were safe, said French president Emmanuel Macron’s office. It added that a US woman and a South Korean woman were also freed in the covert operation.

“The precise and determined actions of French soldiers allowed us to take out the kidnappers while protecting the lives of the hostages,” said France’s army chief in a separate statement, describing the militant group as “terrorists”.

France, the former colonial power in the region, intervened in Mali in 2013 to drive out Islamist militants who had occupied the north of the country and has since kept about 4,500 troops in the Sahel.

The region, a vast, sparsely-populated desert area, has experienced a spike in violence by militant groups linked to al-Qaeda and Islamic State in past years, highlighting the difficulty international partners face in restoring stability.

“The joint military intervention that allowed us to achieve these results shows our common engagement in fighting against the forces of evil,” said Mr Kabore.

The two French tourists were kidnapped on May 1st in Benin’s Pendjari National Park, home to some of the region’s last big populations of African bush elephant, west African lions, hippo and buffalo.

The park lies on Benin’s northern frontier with Burkina Faso. Their safari guide was found dead, his body riddled with bullets, and their vehicle burned.

The French government had warned its citizens against travelling to parts of Benin near the Burkina Faso border because of the risk of kidnapping.

Swathes of northern and eastern Burkina Faso have been overrun by Islamist militants, leaving the government struggling to assert its authority and forcing more than 100,000 residents to flee.

In February, Burkina Faso’s foreign minister Alpha Barry said militants were increasing their activity in west Africa and that instability in the Sahel was spreading to coastal countries such as Benin and Ivory Coast.

Led by France, western powers have also provided funding and weapons to a regional force made up of soldiers from Mali, Niger, Burkina Faso, Chad and Mauritania to combat jihadists.

But the so-called G5 force has been hobbled by delays in disbursing the money and poor co-ordination between the five countries, while insecurity has escalated in the border region between Mali, Niger and Burkina Faso. – Reuters