Cars, contracts and debt: what Istanbul’s mayor found in 17 days 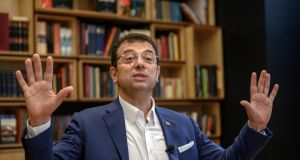 Ekrem Imamoglu spent just 17 days as the mayor of Istanbul before the election council of Turkey annulled the vote and forced him from office. But the short peek he gained into the dealings of the mayor’s office – revealing dozens of cars at his disposal, millions budgeted for officials’ homes and a city sinking into debt – gave him ammunition in the political battle ahead. He fully intends to use it before the new election on June 23rd.

The campaign will be an uphill one: he is aiming to wrench Istanbul away from President Recep Tayyip Erdogan, who as president, prime minister and mayor has controlled the city as a fief for 25 years. Imamoglu delivered a humiliating blow to Erdogan with his victory over Erdogan’s party candidate on March 31st, but Turkey’s high election council wiped away that defeat, making clear that the president who has seemed invincible for so long would continue to fight.

Still, Imamoglu said his brief time in office made him determined to expose and put an end to wasteful spending in Istanbul. “The most important problem was overspending,” he said, “and I saw a strong institutional structure had not been established there.” Referring to his time managing his family construction firm, Imamoglu added, “Since I am a businessman, when I walk into a company I can easily sense money that is wasted.”

The city was mired in debt but spending lavishly, he said, with a budget of 20 billion lira (€3 billion) and a debt of 26 billion lira. “So this is a sign of a badly managed municipality.” He found that he had dozens of cars at his disposal, enough to “spoil a mayor”, but said he refused to see them and had continued travelling to work in his own car. The budget for residences made available for the mayor and 13 district mayors ran into millions of lira, he added.

While the mayor’s office runs 40 per cent of the consolidated city budget, 60 per cent of the city’s budget is handled by 28 private companies, with little transparency, Imamoglu said. Many of those companies are run by supporters and allies of Erdogan, and the vested interests of his close circle are thought to be one of the reasons that the president has fought to maintain control of the office.

The mayor’s office is responsible for granting contracts for services, and a new mayor could end or reassign lucrative contracts. Turkish newspapers have also reported that the Istanbul municipality paid millions of dollars to charitable foundations run by members of Erdogan’s family last year.

Despite the city’s debts and the current economic downturn in Turkey, Imamoglu said Istanbul could not only reverse its position but also contribute to lifting the national economy. “Istanbul really has big opportunities,” he said. “If it is managed well, Istanbul has the potential to support the Turkish economy.”

Yet his short spell in the mayor’s office also revealed the considerable obstacles before him, not only from the election council, but also from obstructive bureaucrats loyal to Erdogan’s ruling Justice and Development party, the AKP.

Erdogan rose to power by becoming mayor of Istanbul in 1994, before becoming prime minister in 2003. He has often been quoted saying that he who holds Istanbul holds Turkey. Imamoglu is already being compared to the young Erdogan. He comes from the same Black Sea region of northeastern Turkey, famous for its nationalist, fighting spirit, and he has been praised as a local mayor with a talent for getting things done and having a common touch.

He has also been touted as someone who can reach out to both secular liberals and conservative Turks and Kurds. His name means son of an imam, and his fluent recitation of the Koran during a campaign visit to a mosque swiftly went viral on social media.

He accepted the election annulment with equanimity, an attitude that has become his signature. “I went there with just my jacket, and I left putting my jacket back on,” Imamoglu said, sitting in a borrowed office in the Istanbul suburb of Beylikduzu, where he is the district mayor. “After a break of around 45 days I will be there again and carry on working.”

He said the annulment was invalid and still described himself as mayor, but he has ruled out protests or civil disruptions that could play into the hands of Erdogan’s AKP. On Monday evening after the high election council made its announcement, Imamoglu rolled up his sleeves onstage and urged supporters to focus their energy on winning again. He has adopted the call from a schoolboy supporter, “Everything will be fine,” as his campaign slogan.

“We will be on the ground with 10 to 20 times more of our power,” he said. “Now in this process there are tens of thousands of lawyers and millions of volunteers. Even the conscience of the people who would not vote for us but for AKP is with us.”

He even joked that his possible arrest could help him, in the same way that Erdogan’s detention by an earlier government for reciting a religious poem had helped propel him into power. “At the end of a possible arrest, one becomes the president,” Imamoglu said. “So they would be concerned about that.”

He said the public mood has shifted in his favour, and he is even receiving messages from disaffected members of Erdogan’s party who feel their rights were denied when the election was cancelled. Imamoglu brushed aside speculation that this contest for Istanbul could help him challenge Erdogan for the presidency in four years.

“My only aim now is to run Istanbul,” he said. “I want to complete what was interrupted.” – New York Times